It happened like this … an English family move to France. Part 22. The story closes. 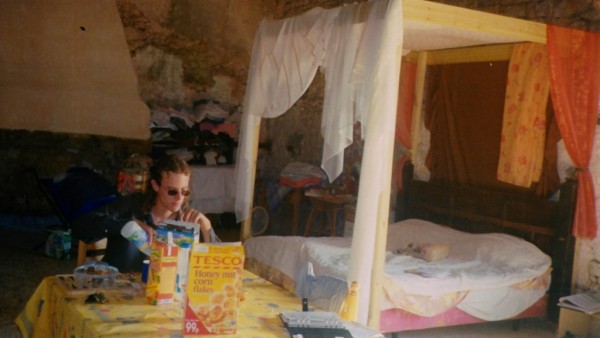 We lived in a barn.  Seriously, it was a barn.  There was just one huge room approx 12 meters x 7 meters.  Underfoot was the earth dirt which we covered with a screed of concrete.  Above was just the underside of the roof tiles.  The walls were stone, the same stone as in the cottages but ours was neither cleaned nor re-pointed.  All along one wall, where there are now French doors leading to a walled garden, Bruce rigged up a work surface, some shelves, and plumbed in my washing machine and dishwasher.  We also had an old fridge that was so rusty that Jake and I cellotaped magazine pictures over it.

I didn’t mind at all.  It was fine.  We lived in our barn from April through to September, then we would move back in to the chateau as the last holiday-makers left.  In fact I took a kind of pride in living in the barn, which I decorated with left-over bits of fabric draped castle-style over the stone and bunches of dried lavender.  Everything was make-shift.  Our bed was two single beds shoved together, over which Bruce rigged up a timber frame.  Over that I flung a couple of old net curtains and such like, more to keep bat droppings and dust off us than anything else.  The children slept in the caravan.

I didn’t mind the bats – the only objection I had was when I woke one night to find a bat drinking out of my glass of water by the bed!  After that I kept water in a bottle with a lid! 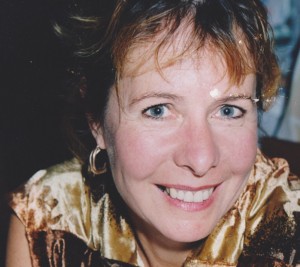 At one end of the barn, next to the fireplace (which William restored) we hacked out an opening in to a smaller barn on the other side.  It had almost no roof and one wall was on the point of collapse so we had to rig a kind of buttress affair, which we tripped over regularly, to stop the wall falling in totally.  In there we had a shower, a loo and a basin.  There was so little roof  we had to take a brolly if it was raining – though having a nice hot shower when it is raining is great.   And summer in the Charente Maritime is usually good.

We invited friends round for dinner in our peculiar abode.  Many of them were taken aback by the way we lived and probably thought we were extremely eccentric.  We had a huge table and chairs  (the table was planks over a couple of trestles) and a couple of old wardrobes for our clothes.  All the sheets and towels for the cottages were housed in the barn with us till William built me a laundry room several years later.  It was difficult to keep things tidy – and dust was a never-ending problem.  But as I say, it was fine. It was even fun.

A long week-end in Gibraltar; as has always been our wont, if there is money to spare we spend it on travel. 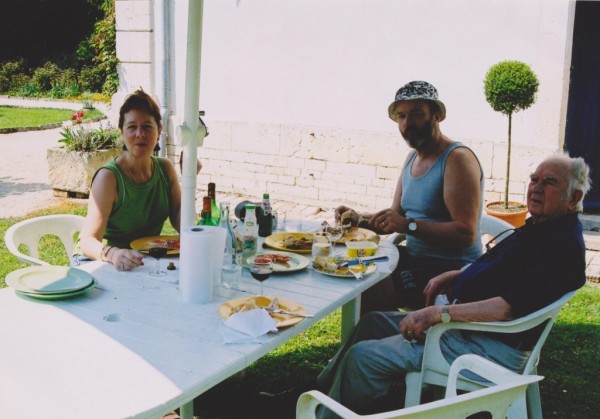 Sitting outside with my father-in-law. 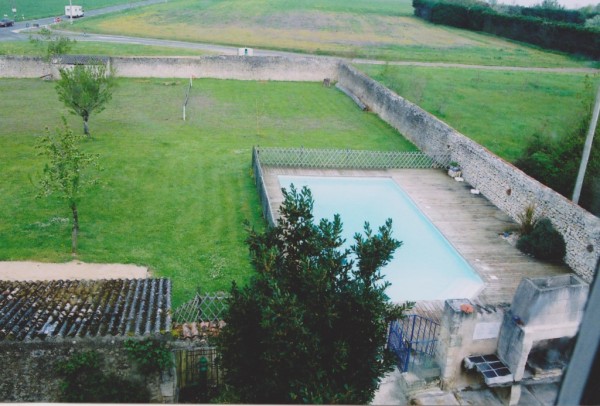 It always surprises me when I look at photos like this how bare everything was !  Of course, we had had the big storm, so all our trees were gone and the new ones not yet grown.  That wall has since been raised by three or four feet, and there are now trees all along the edge. 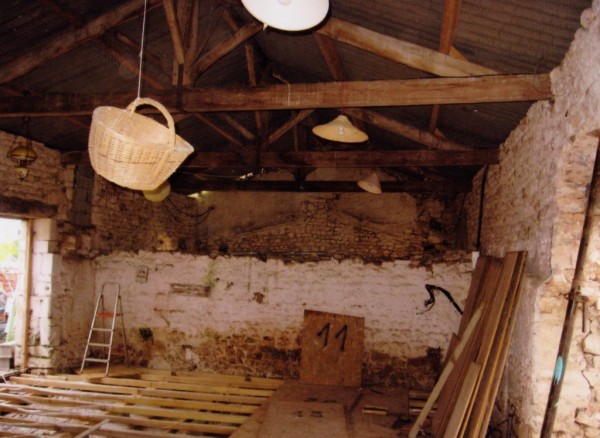 Our barn ready for the floor.  Why is there a basket hanging there ?  – oh, I have no idea!  I expect there was a good reason for it at the time.  That white section of wall now has a door in it which leads to our bedroom where the workshop was.  We didn’t convert the barn for several years, and that wall turned out to be three feet thick.  A staircase now runs up near where the ladder is, and that is now my office up there on the mezzanine. 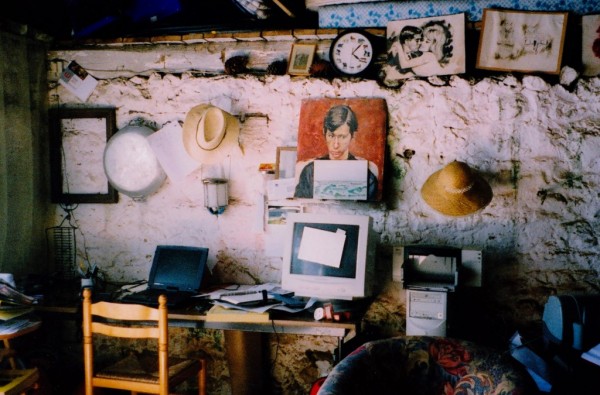 My office in the barn days 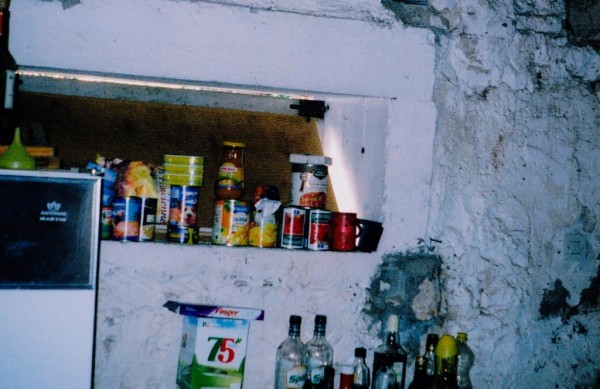 William’s first “real” car about a month after we bought it.  Kids! 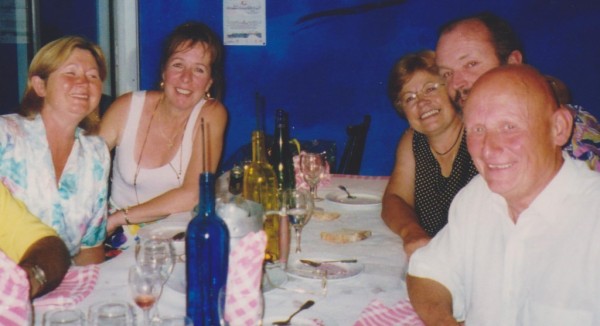 From left to right, Michel’s elbow (yellow T-shirt), Edith, me, one of the cleaners, Bruce, Henri.  At the end of the season we always took the staff out for dinner till we realized that quite often they only came because the felt they had to – they didn’t consider it a treat at all!

It was at this time that Henri and Edith came in to our lives.  The most unexpected things happen at the most unexpected moments.  Henri and Edith, both from the north of France, were the very best friends anybody could ever wish for, and they stood by me through many many traumatic situations to follow, frequently going way beyond the call of duty.  They lived for ten years in our roadside cottage and acted as caretakers when we were not there, and as very dear friends whether we were there or not.  And we were there less and less over the next few years, as we at last bought a bolt-hole back in England, and also set off with our caravan on a five-month trip around southern Europe and Turkey, with many more trips to follow.   My lovely old daddy died very suddenly when he was 85, and it was to Henri I turned when I needed outside comfort and opinion as I faced more tests …

The children grew up and left home, as they do.   We all meet at Les Cypres in the summer, now with grandchildren and partners of our off-spring.  Bruce and I travelled a great deal for a few years, not wanting to be in France but unable to buy a house in England.  We have lots and lots of friends, both French and British, but when in France we will always tend to veer towards British friendships – well, birds of a feather and all that.  I think most expats would agree.  It is just easier, if only from the language point of view.  My great chum in France, actually, is Mexican.

Bruce’s Meniere’s got a great deal worse for a while, and he spent almost an entire year lying down.  He has since had mild, medium and bad attacks, sometimes so bad that he is hospitalised, but usually more unpleasant than anything else.  Touch wood, he has not had an attack for over a year now, though the tinnitus and deafness never leave him.

I had my first book published within a few years, and the other books followed quickly.  I write regularly for a variety of web sites and magazines about life in France.  I am sometimes criticised for my out-spoken manner, but find that those who can imagine or who have “been there” relate to my story – those who react  negatively to my series (and there are just a few, perhaps less than 1% of my readers) are those who really do not know – they think they do, of course, but they don’t.  You know what I mean.

By popular request I have continued with our story, starting a few years later :-