It happened like this … an English family move to France. Part 21. Before-and-after cottage photos. 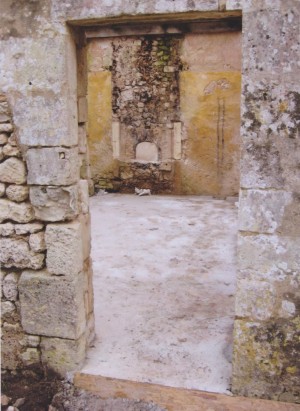 This is the remains of a bread oven in what is now cottage 6.  I had forgotten there was a connecting door there.  I see the concrete screed is down, ready for floor tiles.  This area was thick with creeper and broken stone, bits of wood, stinging nettles … 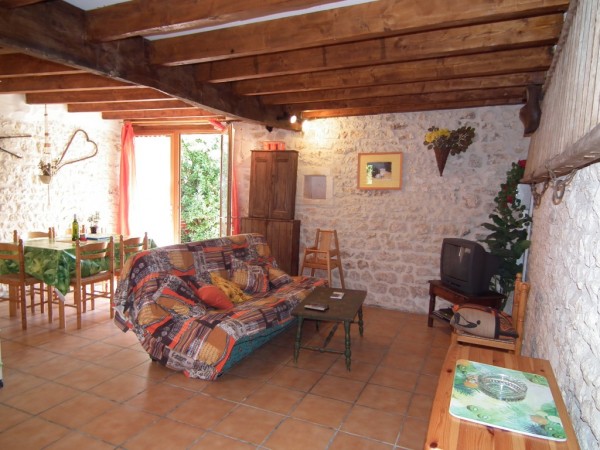 The interior of cottage 7 – you can just see the upper part of  the manger hanging on the right hand wall.  All the cottages are more-or-less identical so that furniture, crockery or whatever can be moved from one to another if the need arises. 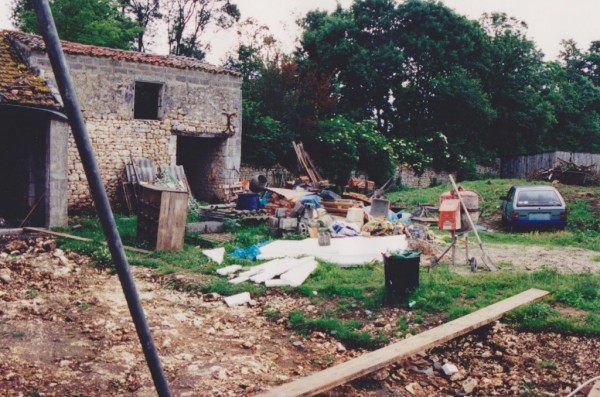 The exterior of cottage 7 when we started – and William’s old car! 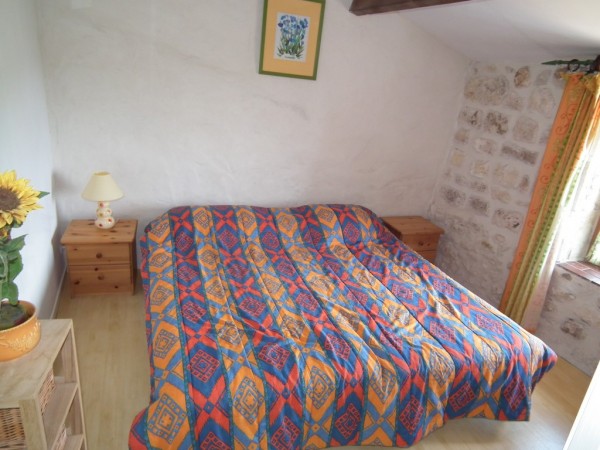 A bedroom in cottage 4.  We kept some of the old stone work (on the right by the window) but we covered a lot of it up because it is dusty stuff and, although people use it to give character, it is really a nonsense because no house would ever have had bare stone work indoors unless the people inside were exceptionally poor. 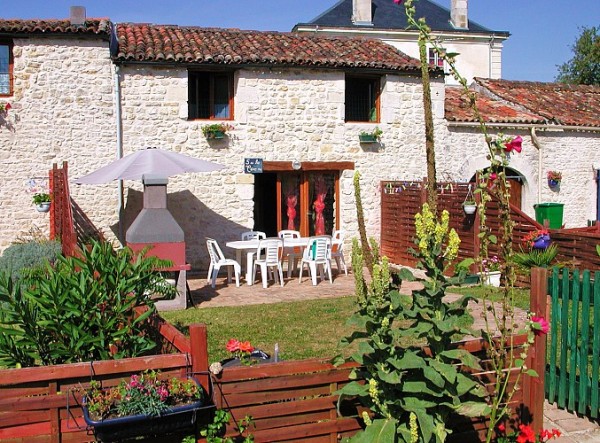 The exterior of cottage 5.  Because of the rocky grounds not a great deal will grow, but I did manage to get mimosas growing along the front of these fences, but they were destroyed by frost one very cold winter.  Almost all plants are in pots.  Hollyhocks ready to bloom in the front there. The pool is always very popular, of course.  We sometimes use it, but not often.  That first summer a little boy, the son of some guests, learnt to swim in there and years later he became a swimming champion.   We put decking all around rather than tiles  because we had had trouble with the tiles shifting around the pool in our previous house.  Also, of course, decking isn’t so unforgiving if you trip over.  We do have to go round with a stanley knife regularly and shave off splinters, and recently all the decking had to be replaced, but on the whole we have been very pleased with it. Creating the pool.  I chose the pool liner in two seconds flat.  The man was flabbergasted. “But Madame!  You need to spend time choosing!”  I have chosen, I said, I don’t need time.  After all, blue is blue, and whether the edging is diamond patterns or circles or squares, it really doesn’t matter. 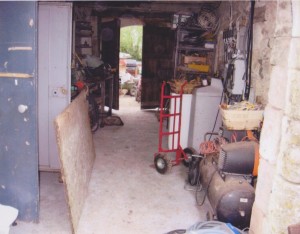 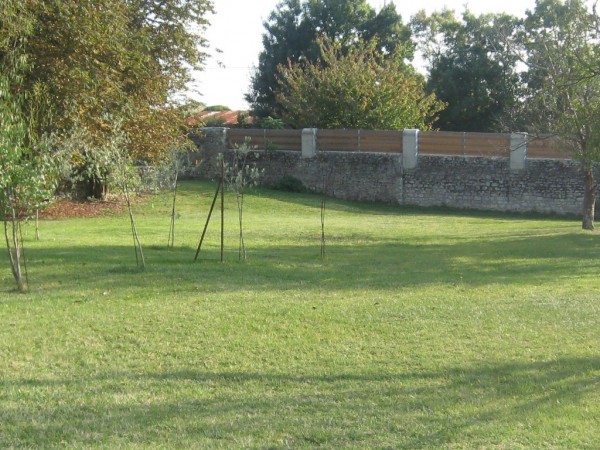 As time went by the muddy and derelict grounds turned in to lawn. 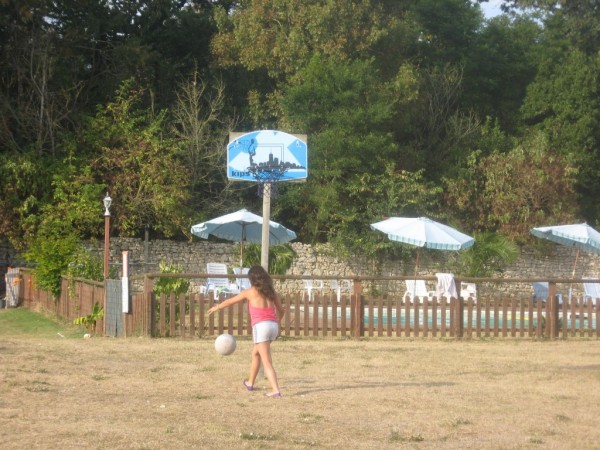 By the end of August the lawn is almost always parched yellow.  We are not allowed to water it, not even from our wells, but I don’t mind it at all – it reminds me of childhood in Africa. 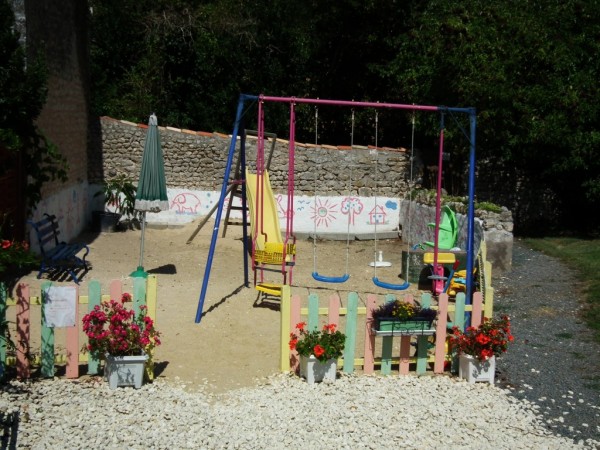 Play area for little kiddies.  I painted the lower half of the back wall, which had old concrete over it, with bunnies and ducks and things.  It all needs re-painting now.  I’ll see to that in the spring. 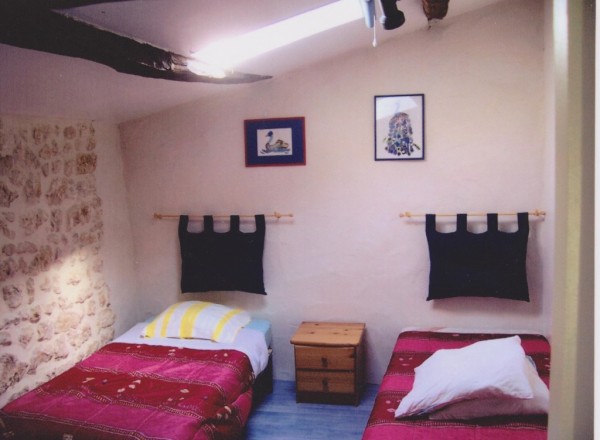 Another small bedroom, this one with a skylight rather than a window because we couldn’t get permission for windows on the chateau side.

The guests arrived and many came back year after year.  Then their children got older and they didn’t come back any more but are replaced by other families with little kiddies who, in turn, return again and again.  That first year we got some things wrong, of course, but basically it was fine.  Money was a constant problem and we had to buy as cheaply as we could, or make do with re-painted second hand … that kind of thing.  The remains of what had been a building site, where the concrete mixer had stood and where skips and trucks had passed back and forth, took a full year to grow over, and in every cottage without fail I found a section that I had forgotten to paint or a shelf I had forgotten to cover; or perhaps it was a light bulb missing or a curtain rails the wouldn’t stay put … with eight cottages, you’d be amazed at how much there is to do.

We made mistakes with the chateau too that first year – what to us seemed so wonderful after the derelict ruin we had worked in for so long, was not always wonderful to people who were spending their main holiday there.  But it got righted with time and we have nothing but good reviews.

There is a “type” of guest who complains or writes a bad review.  Mercifully they are few and far between, and nowadays the property owner can retaliate in no uncertain terms.  These “types” are invariably after a freeby of some sort.  It is a great shame.  The reviews system evolved in order to protect people from unscrupulous owners who would advertise something that was not – in the south of Spain there were many very traumatic stories about the dreadful accommodation.  But the review system got out of hand so that, in time, people were writing nasty things about perfectly nice people and places just for the heck of it.  Their little moment of power, I suppose.  People who do that regularly now get blacklisted – and quite right too. Bits of work dragged on for well over a year and we kept the two Michels on for probably four years.  I found a job for the younger Michel, working on the property of a notaire friend, but the older Michel had become dangerous – climbing on to unsafe things, wielding a pickaxe too close to somebody else, and the final crunch came when he started shooting moles in our garden.  He was furious and very distressed when we told him it was time to retire.

Bruno found work elsewhere and we run in to him from time to time.  His son has become a heavyweight champion – strange when you think what a small, wiry man Bruno was!  The others moved away or moved on.  I kept Francoise for a long time, and I used to say she was my favourite charity because she became undeniably less and less useful, more and more dotty, but she’d have been heartbroken to lose her place at the chateau.  When she stopped coming she was already not really properly aware of what was going on.

I work hard on this web site, so if you enjoyed reading this – please share it !

Catherine Broughton is an author and artist