Guatemala – Travels with a Biro 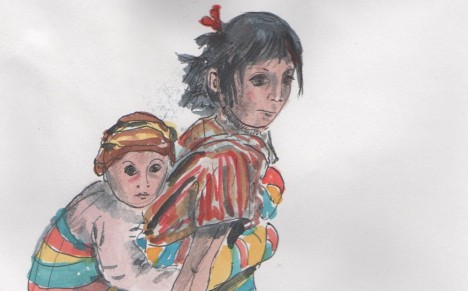 At the Guatemalan border they wouldn’t let us through.

We queued for what seemed like ages (my husband tells me that everything always seems like ages to me!) in a crowded room in intense heat.  We were surrounded by the sounds of Guatemalan workers heading home after a work stint in Belize, male and female, with or without children, chickens and large cloth bags bursting with old clothes.  The adults are on the whole short, and dark, and have a certain smell to them which seems to be a mix of sandalwood and rice, not unpleasant. They were all dressed the same in baggy trousers or wide skirts, with the exception of a couple of totally ghastly women who were dolled up to the nines, make-up, earings, tight little jeans (must have been very hot) and high clickety heels.  The cacophony of sound as children cried and chickens swqualked was overridden by the Spanish chatter as they discussed how much they had (or had not) earned and how long they’d been away.

Conditions are better in Belize, certainly in these small rural towns.  An unskilled Guatemalan earns the equivalent of about £5 a day at home, often less,  but in Belize can earn as much as £10 a day, often more.

At the end of the queue we showed our passports and answered a variety of questions about why we were entering Guatemala.  We want to visit Tikal, we replied.  Ah yes, of course, they said.  They stamped our passports and then grunted something in Spanish which I didn’t catch.  A friendly local – and suddenly we were utterly surrounded by friendly locals, all hoping to get a tip of some sort – showed us that we had to queue up again at a different place, which we did.  More chickens, more children, more high-pitched chatter and more cloth bags bursting at the seams.

After another long wait we were asked for our car documents.  It is our own car (we keep one in Belize, as one does).   A man rose from his seat and accompanied us outside.  The car was incredibly dirty, inside and out.   By this time we had driven up through the Yutacan peninsular in Mexico,  over to Merida and then down to San Andres via  Campeche.  Our plan had been to enter Guatemala via the Mexican border at Tapachula, cross Guatemala and re-enter Belize by boat via Honduras.  However, we discovered  that the mountains in between were very cold, and we only had shorts and T-shirts with us. Compared to the Mexicans we are Very Big People and after a mad hour trying to buy warm clothes we gave up.  Then we found that we could not get our car on the boat in Honduras … so we abandoned that trip for another day, re-entered Belize via the border at Corozal, spent a day in Belize visiting a club-foot child whose parents don’t understand about the operation to right the foot, and entered Guatemala via  St Ignacio.

Which was what brought us to this border.

You may not go through, the border-wallah said, not with your car anyway.   Why ever not ? we asked. The papers are wrong, came the reply.  No they’re not, we said, we have got all the insurances, everything is in order.  The car documents had been carefully written out in Belize by a dear little lady using her very best handwriting.  But on close inspection we found that she had got one digit wrong.  She had written the digit 1 instead of a 7.  The border official held his hand out discreetly to one side, palm up.  You may not take your car through, he said. 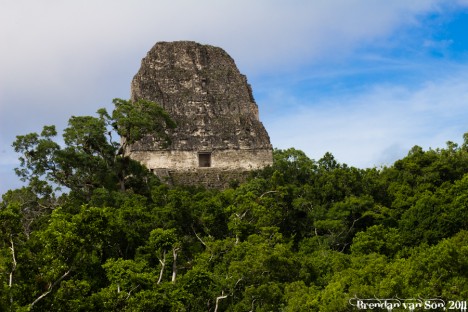 No, no, he replied, still holding his hand discreetly, palm-up, to one side.

Bribes are the downfall of so many of these countries.  There are times when one is forced to pay a bribe and there is nothing you can do about it (in Turkey we had been forced to fork-out around £500-worth of bribes a few years earlier).  But if there is a way you can avoid paying a bribe, you must absolutely not pay it.

Before I had even registered what I had said, we were surrounded by men, young and old, volunteering to be our taxi.

Taxi licences were out of the question, probably driving licences too.  We were finally taken the 4 hour ride to Tikal in an old Ford that knew nothing about MOT tests and was driven by a boy who appeared to be aged twelve.   Very nervously he told us he wanted the equivalent of £10 to take us there, and then £10 to come back and fetch us three days later.  He was flabbergasted when we agreed to it.

I did the sketch somewhere en route for Tikal … a child of nine or ten carrying another child of two or so.