Food during the Prussian seige of Paris 1870-1871. Snippets of French history.

The French emperor, Napoleon III, declared war on Prussia on July 19, 1870, because his military advisers told him that the French army could defeat Prussia, and that such a victory would restore his declining popularity in France. Wrong! 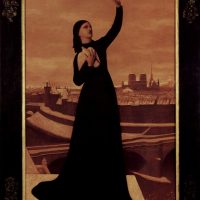 “The Dove” painted by Chavannes (1824 – 1898). The French were ingenius in their use of doves, pigeons and hot air balloons for getting messages in and out of Paris.  For a long time it was claimed that the first “air ambulance” was a hot-air balloon at this time, but it has since been disproved.

The Prussians responded with a crushing defeat for the French, part of which was the long siege of Paris, during which time no goods were able to get into the city.

Here is an hotel menu from 1870.   The people of Paris were starving and ate what they could, to include the two elephants in the zoo, as well as kangaroos and almost all the other animals.  When you are starving and you are determined to not surrender, you do what you can!  I suspect we would all eat these things if we really had to but today, straight after my Weetabix and yoghurt, all I can bear to look at on the menu is the begonia dish! 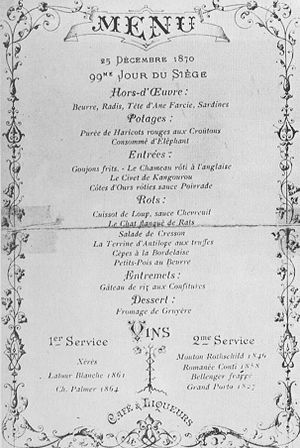 In fact the French did surrender in January 1871.  The Prussians brought food in to the starving citizens. The end of the siege marked two important events: the end of the Napoleon dynasty (Napoleon III) and the start of the German Empire (with Wilhelm I as Emperor and Bismark as Prime Minister) which lasted less than 50 years to the end of the First World War. 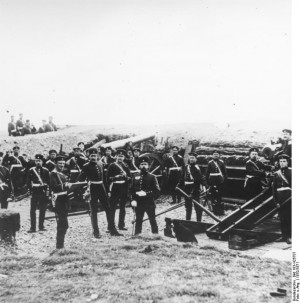 Prussian artillery outside the walls of Paris.

The word “bistro” comes from this era, because in Russian it means “quickly”.  We can just imagine the Prussian soldiers sitting in a Paris cafe, ordering food and drink and shouting “bistro!”  Bring my supper – quickly!

A holiday in France ?  Go to www.seasidfrance.com