Every picture tells a story – on how to read Art. Part 11. 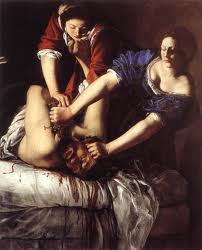 This painting was done in 1621 by a woman named Artemisia Gentileschi.  She was the daughter of one Orazio Gentileschi, an Italian and an equally talented artist who was erroneously credited with his daughter’s work for many years.

The painting shows a story that would have been well-known at the time.  Varying versions of it have been reproduced hundreds of times, some better, some worse, my favourite being the one done by Carravagio some 80 years earlier.

The painting is called “Judith slaying Holofernes”.  The story (in a nutshell) is taken from the Old Testament of the Hebrew Bible.  King Nebuccadnezzar invaded Palestine and put his general, a very cruel man named Holofernes, in charge of all the coastal towns.  Camped outside Judith’s town, he and his men raped and pillaged, cut off the town’s water, and destroyed their gods.  The town was desperate.  Judith, a young and very beautiful widow, made her way to Holofernes camp and invited herself in to his tent.  She got him drunk, seduced him and, with the help of her maid servant, decapitated him as soon as he was asleep.  She carried the severed head back in to her town and saved them all ….

The talent this young female artist had is breathtaking.  A very gory picture, it is nonetheless beautifully painted – look at the folds in the various fabrics, the treatment of light and dark (called chiaoscuro), even the blood running down the side of the mattress.  Look at the expression of disgust on Judith’s face, and the expression on the servant’s face as she tries to help her mistress.  In Caravaggio’s version Judith is extremely pretty and a lot younger (I find this woman somewhat manly) and the maid servant is a little old crone – both have brilliant expressions on their faces – it is worth your looking it up.  In several versions Judith is naked. Despite the horrid subject, one does have to admire it.