Every picture tells a story: on how to read Art. Part 12. 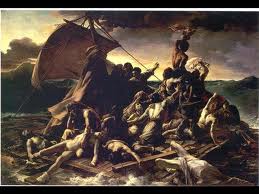 At the height of the period of French Romanticism, in the first half of the 1800s, the artist Théodore Géricault stuggled to make his name known.  He was a talented painter in a country heaving with talented painters.

For the salon he chose to paint a controversial scene, which he named Le Radeau de la Meduse – the raft of the Medusa.  This harrowing scene depicts the survivors of the ship, Medusa, which ran aground off the coast of Mauritius in 1816. Of the 147 passengers who managed to clamber on to hastily-made rafts, only 15 survived, having undergone hunger and thirst, appalling sunburn, murder and even cannibalism.  The tragic and traumatic story hit the headlines in France and to paint a scene of it, still so fresh in everybody’s minds, was daring in the extreme.

This was an era of genteel ladies.  Tragedy was depicted in romantic terms. People were very rarely portrayed as ugly, let alone naked and dying.  Nudity was reserved for Venuses and goddesses and Greco-Roman likenesses.  The Impressionists, with their idyllic scenes, were about to make thier mark and the likes of Poussin and David were far more to the average tastes.

This painting hit the headlines.  Critics were divided neatly in to two camps: those that hated it and those that admired it.  Gericault’s aim was achieved: he had been noticed and was thenceforth – for good or bad – hailed as a great painter.