Every picture tells a story: on how to read Art. Part 8. 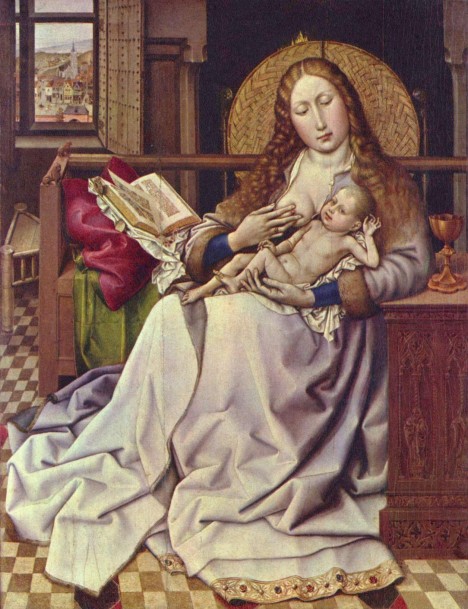 In the 15th Century the Gothic style developed in two different directions.  One was in Florence, and Italy in general, in the form of the Renaissance.  The other was in the north of Europe, notably in the Netherlands.

The northern style let go of the overly decorated and gushy golden look and adopted instead a version of pictoral reality which was new to the world of art.  Flemish artists chose to portray real life as far as they were able, and we start to see the first everyday portrayals of bedrooms, living rooms, day-to-day life.  Minute details were included, details of real things as opposed to the allegoric angels and olive leaves we have seen thus far.

We see a living room: tiles on the floor, a sideboard in which the Virgin leans an elbow, a cup from which she has been drinking.  Behind her is a wicker fire screen (you can just see the fire behind) which doubles-up as a halo … here Campin is submitting to the traditional halo for divine people, yet he refuses to make it either a golden one, or a real one. The baby doesn’t have a halo at all. This was a real and slightly shocking break away from tradition.  On the bench behind the Virgin are a few clothes strewn about, an open book, and beyond this there is a small table under a window.  Through the window (and this is typical of Flemish painters, later copied by Italian artists) there is an exquisite scene of a town.  We can’t see it in this reproduction but in the town there are men climbing a ladder to fix the roof, a woman standing in a doorway, some figures on horseback.  The message is clear: there is real life out there, away from this religious stuff!   More importantly, the Virgin is holding her nipple in readiness to feed the baby, her hair is loose and un-made-up, and she has spread a nappy (diaper) over her lap.

At this time portraiture started to appear too.  It had not really existed since antiquity (though figures of patrons often appeared in paintings, but not in a portraiture sense). Campin was the first artist to look at people – just ordinary people – with a view to portraying them on canvas. The individuality of the sitter became paramount, and not the sitter as part of something else.  A whole new genre is born.