Every picture tells a story – on how to read Art. Part 9. 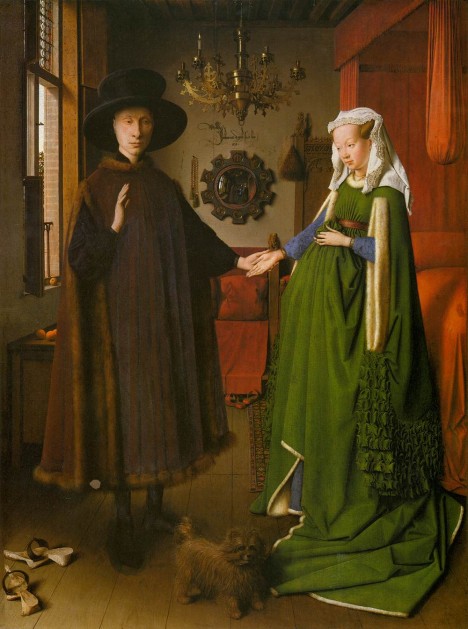 Jan van Eyck, the Dutch master, is often credited with discovering oil paint, but this is not correct.  Oil-based paint had been in use for a long time, usually for sculptures.  What van Eyck discovered and mastered was how to put a long-lasting varnish over paintings.  The real breakthrough came soon afterwards when the van Eyck brothers mixed their varnish (made from nut oils and mixed with resins) with paint: oil paint as we know it was born.  Up to this point in the history of art, paint had been usually mixed with egg yolk (called tempera) and though it was technically an oil (or fat to be more precise) paint, it nonetheless left a dullish residue.  The introduction of oil, real oil, caused a shiny glow that was totally new.

This in turn meant that paintings on canvas or wood (as opposed to the painting of stone sculptures) could be given a luminosity that had hitherto been denied.  The appearance of painting was transformed for good.

Van Eyck’s best known painting is “the Arnolfini marriage”.  It now hangs in the National Gallery in London.  The moment captured is when the young groom is just about to place his right hand over his bride’s hand.  The young Arnolfini (he was Italian actually and so was his bride, but they were married in Flanders) has taken off his shoes. Under the bench in the background are the bridge’s shoes. You don’t wear outdoor shoes indoors. The symbolism of the shoes is not known – but there was doubtless a meaning. At the couple’s feet is a dog – a symbol of fidelity and domestic contentment.  Behind the groom is a window and a chest, on which are some apples, left to ripen in the light – a symbol of fertility and a reminder about the Garden of Eden.  Behind the bride is a bed – the symbolism of which we don’t need to go in to.  To our modern eyes the bride looks heavily pregnant, but a big tummy was simply a sign of fertility, no more.   The bride has a sweet expression on her face – almost shy – and the groom, with his dimple in his chin, is terribly earnest.

Above the couple is an exquisitely painted chandelier – the detail is remarkable – with a solitary candle burning even though it is broad daylight.  This is a symbol of church, of God and of holy witness.  In those days couples could marry this way in a private ceremony at home as long as there were two witnesses, one of which appears to be the artist himself because his signature appears on the wall behind, over the mirror.  We cannot see it in this reproduction but a statue of St Margaret is carved in to the piece of furniture beyond the bed – St Margaret being the patron saint of childbirth.  Fertility and the bearing of children was of paramount importance, of course.

Most exquisite of all is the mirror.  Again, we can’t see it here, but it is a convex mirror and all around the edge there are miniature (and recognizable) scenes from the life of Christ.  In the glass we can see the reflection of the young couple, of the artist himself and of the second witness. Not only is this encapsulated in the tiny space, but it is clearly recognizable and done in such a way that we see the mirror is convex. Amazing.

Click below for Catherine Broughton’s best-seller, a novel set in Cyprus:- (also available as an e-book on this web site)