Every picture tells a story – on how to read Art. Part 10. 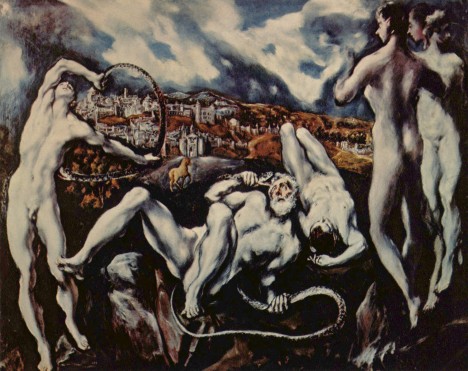 Like the term “Renaissance” the term “Mannerist” applies to a very broad range of styles and of painters.  It was a fairly short-lived style, lasting about 60-80 years and gone by the mid- 1600s.  It is characterised by exaggerated movement, rather gushy postures with a lot of limb gestures and facial expressions.

The Mannerist to beat all Mannerists has to be el Greco, meaning “the Greek” because he was born in Crete and had a Greek surname – Theotokopulous.  He was in fact Spanish, from Toledo.

Personally, I find his style most odd, with elongated figures that seem to bear little relation to the art of the day, Mannerist or otherwise – this painting was done in 1623.  This was the time of the counter-Reformation in Spain, something about which el Greco felt very strongly, and this is reflected in all his art.

In this picture we see the same story we saw earlier – that of Laocoon and his two sons being devoured by a snake as a punishment from the gods because he had tried to warn the Trojans that the Greeks would sneak in to Troy in a wooden horse.

However, el Greco paints all three figures as white and grey, pale and, although they look strong enough, they are struggling with a snake that really doesn’t look so dangerous.  To one side stand two figures, probably the gods Apollo and Athena, watching the punishment. The further of the two figures appears to have two heads – one looking in and one looking out.  In the background is a horse, symbolic of the Trojan Horse, and beyond that is el Greco’s home town of Toledo rather than the town of Troy. The sky is heavy : storms are approaching, doom, disaster.

This picture, set in Spain and showing the vengeance of the gods, was a political and religious statement on el Greco’s part.

Click here for “We restored a huge old house in France”