Every picture tells a story – on how to read Art. Part 7. 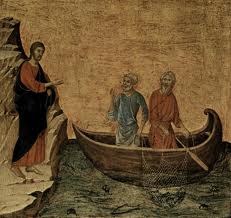 At the height of the Middle Ages, ie around 1300 AD, Gothic art emerged in Europe.  It began with architecture.  A new era of prosperity had started, and Christianity had become triumphant.  The age of chivalry was born.  Magnificent Gothic cathedrals went up, some of the best examples being in Chartres, Rheims and Amiens in France.  Hot on the heels of these extraordinary buildings came Gothic art, its most significant difference being a leaning towards naturalism.  It started in Italy and was the dominant painting style right through to the 15th Century.

We can see a remarkable difference between, say, Giotto’s painting and the stiff figures of the Dark Ages, or the over-glorified golden works of the Byzantine period.  In this picture, by Duccio of Siena, Italy, we can see movement, albeit still rather stiff, the folds in the robes, the character of the people depicted.

Painted on wood sometime around 1310, this shows Jesus calling the apostles Peter and Andrew.  They are fishermen, out on their boat.  Jesus and both men each have a halo, which we tend to think of as a symbol of Christian divinity, but in fact originated in the sun gods Mithras, Apollo and Helios.  The pattern in the halo attracts attention to it.

Jesus holds his hand out gently.  He is not commanding, nor beckoning, yet he is clearly expecting the two men to come to him.  He is standing on a rock, a symbol of the church.  Jesus chose Peter’s name, meaning “rock” and this symbolism would not have been lost on people “reading” this picture – Peter being the head of the church.  Jesus is calm and is barefoot to show his humility.  His bare feet are juxtaposed with his regal robes to show authority. His robe is blood-red to reflect his coming crucifixion, and the purple mantle (with a gold edge) shows his royal status as King of Heaven. (In the original the difference in colours is more precise).

The apostle Andrew (in red) has an expression of understanding, of comprehension on his face, and this is to represent the moment that Andrew’s faith was revealed.  He has paused in his task of hauling in the nets, he is listening.  Peter and Andrew were brothers and the scriptures note Peter as the noisier one – indeed, Peter has his hand up to object.

The fishing net is full.  This too is symbolic – it means that the “fishing of men” will be successful.  And there are plenty more fish in the sea.  The whole scene has a gold background to heighten the sense of glory and of divine presence.