Every picture tells a story – on how to read art. Part 2. 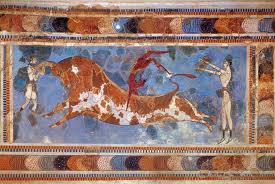 The art of the Minoan Bronze Age was the first to develop in Europe.  Named after the mythical King Minos of Crete, this art emerged, heavily influenced by Egypt, around 3000 years BC.   Despite Crete’s geographical proximity to Egypt, and the undeniable influences, Minoan art is essentially different from Egyptian art.

is largely in the form of painted pottery and carvings. A tiny amount of wall paintings have survived.  Particularly in the wall paintings we can see the similarities with Egyptian art and the differences too – the same kind of technique and style, yet vastly more fluid.  Perhaps the most famous surviving painting is the bull-jumping fresco.  Bull-jumping, ie catapulting over the bull’s horns, is thought to have been associated with Minoan religion, and was almost certainly carried out by trained slaves.

In this picture we can see two white girls and a black youth – the same reddish colour that the Egyptians used to indicate that this was a young man.  The picture can be “read” quite easily.  Start on the left, where a girl is preparing to jump.  In the centre the youth is in mid-somersault, and on the right the girl who somersaulted immediately before the youth has just landed.  She is steadying herself with her arms, just as athletes do today.

As the Minoan dynasty died out, the Mycenaean dynasty began – on mainland Greece – in around 1000 BC.  After them emerged Greece.  Much of the art in the form of paintings is lost because, like the Africans thousands of years earlier, they painted mainly on wood or on leather.  Much of the ancient Greek stonework was later copied by the Romans, and a lot of what we think of as Greek sculpture is in fact a Roman copy.

The ancient Greeks did not make pots or bowls for anything other than practical purposes.  They’d have found us very odd if they saw us put a vase on a shelf simply for decoration!  Their pottery was almost always lavishly decorated with scenes that the people of the time could recognize easily – Dionysos in his boat, for example – we know it is Dionysos because of the grapes and the vine.  Greek pottery was typically concerned with story-telling, and part of the pleasure of the item was in the “reading” of the story it told.