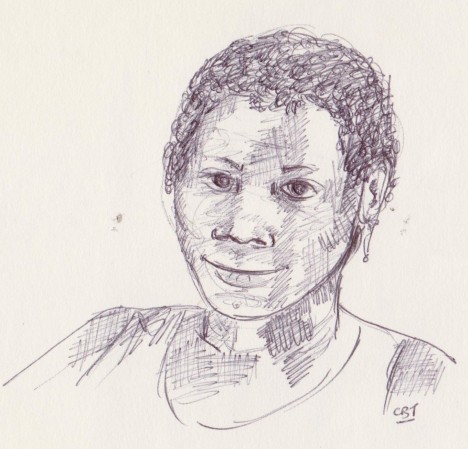 Alice, where I was born, was nothing – but NOTHING – like the nice little town of my childhood.  It broke my heart.  My brother suggested we don’t look at our old house – we knew well in advance that the run-down and dirty dwelling that was sure to greet us would only be upsetting.  So we left it.  We pulled in outside the University of Fort Hare, where my father had been a professor of medicine, and took a few photos, but then we left – it would have been lovely to spend a bit of time in Alice, look up old friends, have a wander around …. but the steep downhill slide the town had taken (along with so many other towns) made us prefer to keep happy memories …

As we drove away, we recognized an old house that marked the corner of a lane that had led up to where one of our workers had lived.  He must have been well in to his sixties when we were children, so we didn’t expect to find him, a dear man called Simon …. but drove along nonetheless, taking a dusty, bumpy track, that soon became litter-free as we left the town behind us.  We were a little dubious because such is the level of violence in South Africa nowadays that it is always a mistake to move away from secure areas.  Not that Alice was secure, but I don’t think it was particularly dangerous either.

We reckoned Simon’s house was at least a mile along the track.  What had once been empty scrub land was now dotted with small corrugated-iron huts with rags hanging over the windows and half-clothed children playing in the dust.  We came across the house quite suddenly, set to one side under a cluster of acacia trees.  It looked the same. A timber building on one floor with a rickety stoep (patio) to the front and a stone out-building behind it.  The paint was no longer fresh (had it ever been fresh?) and everything was more rickety and more faded that before …. but it was the same house.

A woman came out and shouted something in Xhosa at us.  My brother (very bravely, I thought) got out of the car and went over to explain who we were. She looked cross and menacing, and a couple of teenage boys appeared at her side.  But as she listened her face lit up and she shouted something at the house and two other women appeared and a terrifying selection of children of all shapes and sizes, all making a variety of noises.

Somebody brought out a bottle of Coca-Cola (which we didn’t touch) and we all sat down under the acacia trees.  Simon had died years and years ago – the woman, who turned out to be named Thelma – was his grand daughter.  She flapped her hand vaguely in the direction of the town and told us he was in the grave yard.  But, she said, her grand father had often talked about the white family he had worked for and how he used to drive the children to school and how the little girl (me) used to hide behind the seats of the Land Rover and he would pretend he hadn’t seen her and drive home again.  Then, she said, laughing one of those huge belly-happy laughs, Madam (my mother) would make him turn the car around and drive me back to school again.  I remembered it well.  He used to call me Coffee rather than Cathy – it was his little joke.  I told Thelma, and she knew all about it.

No white people live here no more, she told us.  They’s all gone now, she said.  Ain’t no work for nobody now.   ‘Cept in the University where youse daddy worked, she continued, and launched in to further tales from her grand dad, happy, warm stories of better times.  I sketched as we talked, and each and every one of those sketches I had to part with because they wanted to keep them, so this sketch – of one of the several grandaughters – is copied from a photo that Bruce took.