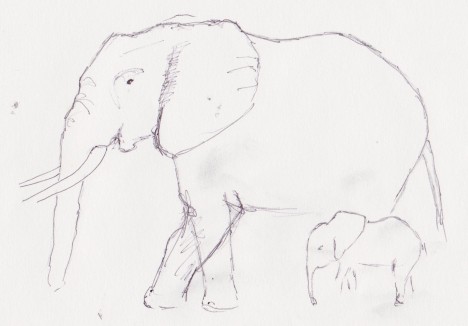 Goodness – thank you all for your various messages, most of which were exclaiming “but where is your sketch of the mother elephant and her baby?!”

So here it is. As you will understand I only had time to sketch this much, what with reversing the car and having Bruce’s camera flung in to my lap and generally trying to not get crushed.   If Bruce got a few good shots I may finish the sketch at a later date.

– There are three types of elephant:

– all elephants are endangered

– they are crepescular animals (from the French word “crepuscule”, meaning dawn or dusk – there is an acute accent on that first e but I cannot see how to add it on)

– there are homosexual elephants !

– females are fertile for only a few days every year and their pregnancy lasts for 22 months. Female elephants have a very wide pelvis, making birthing relatively easier than for most animals (including humans) and with less mother/baby deaths

Mother elephants appoint “babysitters” to look after the baby so that she can feed, though all elephants in the herd will watch out for any of the weaker ones, whether babies or sick or old

They are cared for by the older females till they are about 12 years old, when they form “bachelor” herds till they are old enough to mate, when they then become lone. A male elephant in “must”, ie ready to mate, is extremely dangerous

– they communicate by stamping their feet and making sounds too low for humans to hear, though the sound can carry several miles. They also trumpet.

– elephants are the most closely-knit of any animal (apart from humans) and a female will only leave her herd if she dies or is killed.  Sick or injured elephants are looked after by others in the herd who will bring it food and will even try to revive it if it dies

These are not properly documented, and are subject to a lot of myth and even controversy, but elephants certainly have a ritual when a member of the herd dies, and is the only creature (other than humans) that does.  They sometimes even dig a shallow grave for the dead member of the family and can show signs of depression.