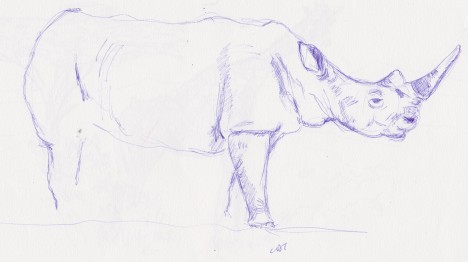 Much to my consternation Bruce signed us up for a Dawn Walk one morning.  Dawn starts at around 5.00, and it is the best time of day to see the animals.  I loathe leaping out of bed early (or even getting slowly out of bed early) but found myself (with Bruce) climbing in to a Land Rover at 4.30 one morning.  The others in the group were young people – in their late twenties or early thirties.

I had a moment of concern about this age gap, but Bruce and I are both very fit, though a four-hour walk at 4.30 in the morning is really not my cup of tea, fit or otherwise.

We drove for about twenty minutes, taking little tracks through the scrub where tourists cannot usually go, and parked by a kopje (rocky hillock) somewhere in the middle of nowhere.

The Rangers gave us a good talking-to:

“Stay in a tight group,” they said.  “Do not make any sudden movements or sudden noises. Do not talk as we walk. If we are told to get-behind-that-tree, then do it immediately and ask no questions. No screaming. No flash photography. No cameras that make odd noises. No mobile phones – turn them off. Obey at all costs. We do not wish to be obliged to shoot any of the animals, they said, but if we are in danger we will shoot. However, you must not put us in danger by not obeying our instructions.”

Okay, we all said.

Agreed, we all said. 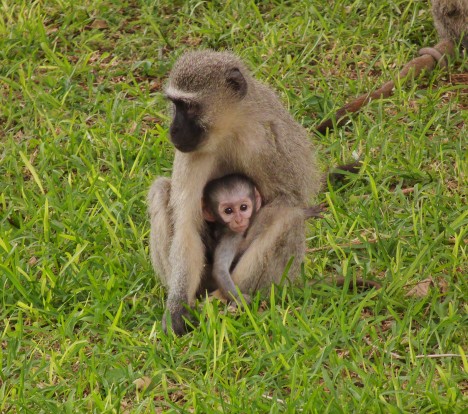 The rangers (two men) loaded their guns, told us to get behind them in single file and to follow.  We climbed the kopje (one of the rangers, stunningly good-looking, periodically held a hand out to me when there was a steep rock to get up, which was unnecessary but very gentlemanly, and I felt that being a teeny bit feeble could work to my advantage if a rhino suddenly charged ….) and we climbed to the top and then sat down and admired the view.

The scrub stretched off in all directions, dotted with small groups of trees. It was almost totally light by now and the sun was already getting hot.  Nothing moved. Occasionally a bird flew up out of the foliage, calling as it went, but the huge, silent and motionless space was otherwise undisturbed.  It was beautiful.

The previous day an elephant had overturned a car that got too close, and the previous week a German woman had been gorged by a charging rhino.  She was OK (in hospital) but it was not an incident that any of us wanted to experience first-hand.

The Rangers explained about the noises the various birds were making – that is a warning call, this one is a mating call and so on.  Their expert eyes scanned the bush as we clambered down the kopje in to the scrub land where water buffalo and rhino, lions and elephants were lurking secretly at every turn.

I stayed as close to the rangers as I sensibly could.  A few people joked about hiding behind Bruce – he is a big man.  A Belgian girl needed to pee and was curtly told that she couldn’t. We walked. Every now and then the lead ranger held a hand up (ah good! A lion! I thought – so exciting!) and we all stopped, trying to breathe silently, and waited in our tight little group and peered warily in to the bushes around us. Nothing. 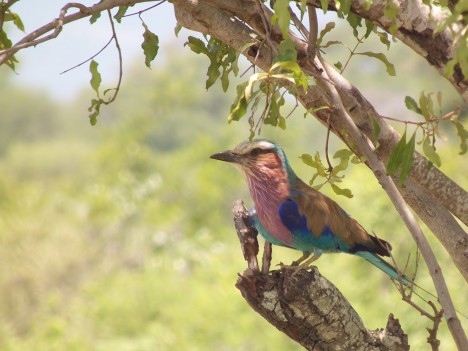 And we walked. Suddenly a ranger held up a hand again. Silence. Hearts pounding. Group close together. (Goody! I thought! A crocodile!  No, no, not a crocodile, there is no river.  So water buffalo ?  I like water buffalo ….)  One of the rangers crept quietly ahead …. We waited …. Some huge creature was about to charge at us … the ranger was making sure it wouldn’t ….

At some point we stopped for “breakfast” (I’ll keep my opinions about that to myself).  By this time the rangers were starting to point out elephant droppings and rhino droppings and cracked branches and even the millipedes.  One of the rangers made a few jokes about not knowing where the car was, and the other ranger told us a worrying story about a monkey and a giraffe … or it might have been about a zebra and an ant.  I can’t remember.

We walked. And there, suddenly, in front of us in all its majesty was what we all by now very very badly wanted to see – the Land Rover. 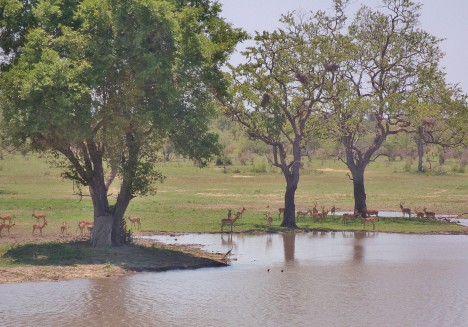