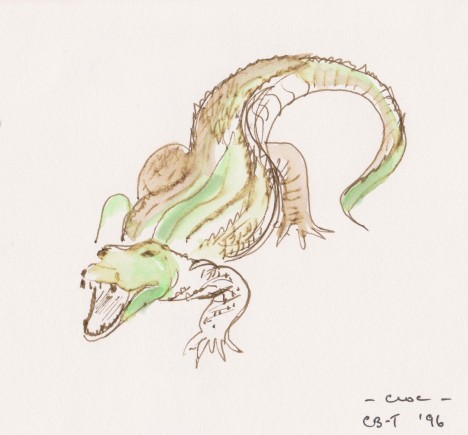 We saw just the one crocodile.  He was so still and so silent that we could easily have trodden on him.  Not that we got out of the car, that is forbidden, though there have been one or two occasions where we had to quickly get something out of the boot (the trunk  for my American readers), or at least open the door for a moment.

Apparently lions do not recognize you as prey if you are in a vehicle, or even if you are on something inanimate – a table for example.  Like there are plenty of tables all over the bush! A ranger we met said that he knew somebody who had done a study of lion behaviour and that it seemed it was fine to sit in the car with the door open, or even to sit on the bonnet, but that as soon as you were “detached” from the car the lion perceived you as prey.  This study was a result of a lion strolling in to his tent one night. The man was lying on a camp bed and the lion apparently just walked in and out again, seemingly not realizing there was fresh meat (so to speak) on the bed.  The ranger said it may be that a lion’s senses relate to what touches the ground, rather than any visual or direct-scent link.

On our last day in the Kruger we were charged by an elephant.  It was a mother, a huge creature, with her tiny (huge) baby who was perhaps two weeks old.  She was feeding at the edge of a dusty track.  We came to a halt not too far away in order to sketch and photograph her, and she seemed happy enough with that for a while.  It is extraordinary to watch an elephant communicate.  She raised her trunk at us a bit, clearly looking at us, and she was saying “move back, you are too close to my baby”.  We reversed a little.  Another car pulled up behind us, and we all watched.  The elephant raised her trunk again and we moved back again, making the other car reverse too.  Then a third and a fourth car pulled over to watch.  One of them, getting nervous as the elephant approached, decided to do a three-point turn behind us, there on the narrow track.

The elephant raised her trunk again and ran towards us a few steps.  We reversed again – everybody reversed despite the car that was still executing (badly) its three-point turn.  You could clearly see the elephant saying “get away! This safari park is 8 000 square miles ! Go and take your photos elsewhere! I have a baby to think of!”

Suddenly, utterly sick of us, she charged.  Trunk in the air, trumpeting, the baby trying to keep up, she came straight at us and we reversed and reversed, playing dodgems with the other cars as we went. Everybody reversed up as quickly as they could, and that elephant kept on charging for the best part of a mile.

Then, almost as if she was thinking “there, that gave you a fright!” she turned and walked in to the bush, her baby under her belly, and stood nonchalantly to one side.  I swear she was laughing.