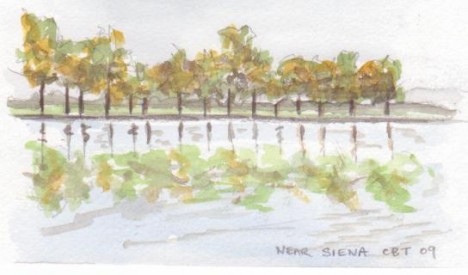 Did you know that St Catherine of Siena is said to have swallowed a cup of pus to prove that nothing was beneath her ? That may and may not be true, and in the 1300s people did do all sorts of odd things, usually to prove their piety. Catherine was a nun and pious to the extreme, and gave away her clothes and food to the poor. She barely ate and was probably anorexic, but claimed that it was God’s will that she suffer from vomiting and stomach cramps. She was the epitome of the old-fashioned overly-devout Roman Catholic who thought that suffering brought you closer to God.

What I like about her story, however, is that she was a woman hundreds of years ahead of her time (– apart from the suffering and pus bit). She was an intellectual, and theologian, a writer and a political activist. She battled all of her short adult life (she was barely thirty-three when she died) to bring peace between the warring factions of Italy, to bring the Papal centre back from France (Avignon) to Rome and to bring humanitarian compassion to the poor and the sick. She wrote hundreds and hundreds of letters, almost half of them to women – which in itself was noteworthy, being at a time when women had little influence.

To top all that she was one of twenty-five children, all by the same mother ! I suspect she saw her mother screeching hard in labour many a time, and that in itself was enough to drive a young girl to a life of piety, particularly as half the babies died.

The road to Siena was beautiful, once we had got well away from the suburbs of Rome. We left Rome on the Apian Way, and our guide book told us that there were some interesting cemeteries to see, but we saw nothing other than traffic, traffic, hooting traffic topped-off with Italians gesturing wildly in their vehicles and shouting obscenities at each other. Not that we had thought we might see some of the old crucifixes, but it was an extremely disappointing drive. Blooming shattering in fact.

It was so cold and the first thing we did when we got to Siena was to buy another duvet (we were caravanning) and some really warm PJs. Well, you do, don’t you ? Visit an incredible old town like Siena in order to buy PJs ? I’ve been trying to work it out – it must have been only late September or early October, yet it was terribly cold till we reached Naples. Despite the weather Siena was full of tourists and tourist shops, but they were tastefully operated within the ancient streets, leaving the magnificent plaza relatively bustle-free for admirers such as myself.

It would be foolish of me to attempt a description of the architectural features of the plaza, never mind the church and the little streets, but suffice to say it was well worth a visit and, had the weather not been so cold, we’d have stayed longer.

Catherine Broughton is a novelist,