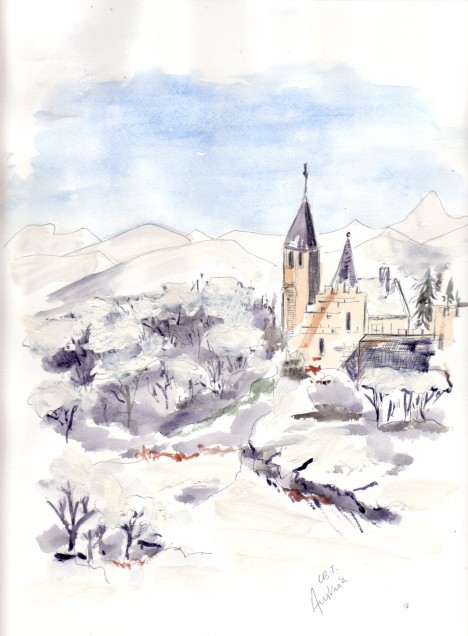 I write from my hospital bed in the pretty little Austrian town of Stvass in the southern Tyrol. I know that the town is pretty because Bruce, who has walked around it several times, has told me so.

I don’t speak Austrian and the only thing I can say in German is “das ist ein Schloss” which means “that is a castle”. About as useful as “la plume de ma tante”. Although I have often found myself in the company of German people I have never had the opportunity to point out a castle – much to my chagrin.

Well bother, I said to myself as I felt my leg snap as I tumbled on the piste a few days ago. Every cloud has a silver lining, but I knew right there and then that I’d have difficulty finding a silver lining to this, least of all when I remembered that the radio had announced temperatures of -16 centigrade. Looking up, I saw thick snow-laden clouds moving in from the other side of the mountain. Nauseous waves of haze swam around me. It was 4.00 and the lifts were starting to close.

Well, all the best people say a prayer at moments like this. So I started: Our Father who art in heaven ……

“You all right, love?” asked a male voice.

Goodness! God has a Yorkshire accent!

I looked up and saw a male figure in a green and yellow ski suit bending over me. Not God, not the Jolly Green Giant, but an Englishman late off the pistes. Rule Britannia.

A snow plough took me as far as the ski lifts, which in turn took me down to the nearest village. Not the village we were staying in, but any village in a storm and all that. Getting on to a snow plough with a broken leg is great fun, but by the time we reached the ski lift the family had caught up with me and helped me off. Emilie, our son’s French girlfriend, said things like “oh la la!” the way the French tend to.

In the hospital X-ray room I tried to find out how to say “ouch!” in German. In both French and Spanish it is “aie!” but that didn’t seem to work.

“I expect you get a lot of ski-victims ?” I asked the plastering-wallah.

“Ah yes, zis is so,” he replied, “but we hev mostly Germans and Russians. You are ze first Engleeesh.”

There was no room on the trauma ward – full, one assumes, of Germans and Russians – so I was put in the side room of a maternity ward.

During the night I woke, dopey with pain-killers, and thought I had had a baby. The unmistakable sound of the new-born was close by. It was clear I had had a Ceasarian, even though the pain was in my leg and not my tummy. Confused, I decided to work out how old I was and came to the conclusion that I was twelve. Realizing that this seemed awfully young, I re-calculated and decided I was eighty-eight. I accepted this and slipped back in to my drugged sleep.

But in the morning, all was revealed. As I said, every cloud has a silver lining. The nurse came in and took my blood pressure and did a few other nursey-things. Then she turned and threw open the curtains. There – out there in the frozen world – was the most beautiful view. A brilliant azure sky and snow-laden mountains. Acres of dark pines, their branches heavy with snow, stretched off to one side and a river tumbled under an ancient stone bridge. A few picturesque houses dotted the embankment and the pale yellow of the winter sun crept up over the white landscape. And there, off to the east, was a castle ………. a beautiful little Tyrolian castle clinging daintily to the escarpment.

“Hey look!” I exclaimed and pointed out of the window. The nurse turned to where I indicated, her mouth open in surprise. I heaved myself on to one elbow, enthralled.