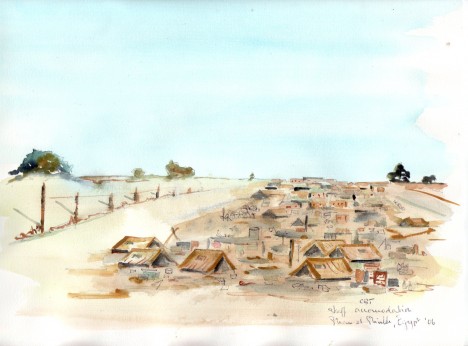 Some kind of mid-life crisis hit us when I turned 50 and we suddenly, with no pre-meditation or planning, decided to take up scuba-diving and go to Sharm el Sheikh. In our last (or almost last) bid for retaining Youth, the pyramids and other great sights would have to wait. For a year or two anyway.

We joined a scuba-diving class in the public pools in Crowborough and did all the basics and got the little certificate – Paddi Open Water Somethingorother. Then we spent an arm and a leg on our own masks, snorkels, fins and general stuff, and off we went.

We have stayed in many lovely hotels many times, but it has to be said that the Sharm one was one of the best, though the staff accommodation hidden away to one side off a dusty road, was real third-world stuff (illustration). Our room was excellent, the food was excellent, the service was excellent and the diving was excellent. The temperature was just exactly right – it was in May – and our only complaint was some kind of keep fit class blasting out in the pool area for an hour every morning, with some impossibly tanned European female leaping around shouting instructions to overweight middle-aged ladies in shiney leotards – or, as was the case for some, in long black Muslim garb which they also used for swimming.

We did make the mistake of going on a one-day “safari”. It is always the way – the Landrover picked us up first and then spent a million years going round other hotels picking up other guests, before setting off in to the Siniai desert. The road was very bumpy and my boobs leapt up and down, up and down, in the most uncomfortable way. That is one of many advantages of being that bit older: you can hang on to your boobs and who cares. But the two other females in the Landrover were young and tried to delicately and discreetly hold one arm over their chests, which I suppose must have alleviated the discomfort a little, yet it could not have been anywhere near as effective as simply clasping each boob in each hand and holding them still. Once we were allowed out of the Landrover, hours later and having gone past St Catherine’s Monastery which I really really wanted to go to, and having been subjected to bands of little Arab children trying to filch things out of our pockets, we were put on to camels and began an hour-long ride along the coast to what was apparently an authentic Egyptian village. Tents, big and small. Cats, big and small. Flies, thousands of them. Cats and flies leaping and/or buzzing over the Egyptian luncheon that was served in the tents. Every part of me ached from the camel ride, yet I am very fit, considering my age. I slept while others went snorkelling. In the morning, bruised boobs and bums on tow, we both had diarohhea in no uncertain terms.

The most memorable thing about the camel ride was the litter along the shore. Mile after mile of plastic bottles. All around us was the land where the prophets walked, stoney hills and deserted coves, acres of parched scrub where you could feel that even God didn’t want to go ……. And plastic bottles. Apparently most of them come off cruise ships. Shame on you. If you go on a cruise, reader, check out how they handle their rubbish first. 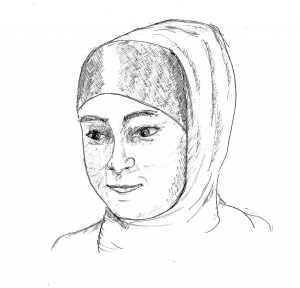 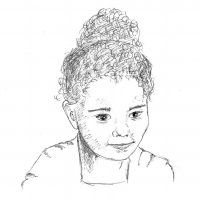