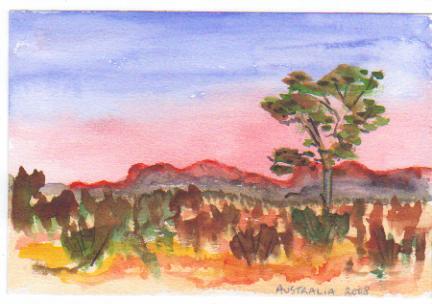 We really REALLY loved Australia ! We spent six weeks motoring around and took a flight
out to Alice Springs and thence to Uluru. I did this sketch somewhere near Alice Springs.

We flew in to Brisbane, collapsed in the hotel, determined to sleep just a few hours, and woke
sixteen hours later. Once restored, however, we walked for ages round this lovely city. It was
October and the jacaranda was in full bloom, great clouds of purple adorning every tree and
fluttering down to the pavement. We hired a camper van – never try to economize is Rule
Number One, for we chose the cheapest camper there and that blessed thing rattled and rattled
and RATTLED all the way up the Bruce Highway to Townsville. Bruce couldn’t hear a word I
was saying and I couldn’t hear him either. Every now and then one of the cupboard doors
would fly open behind us and the contents of our food cupboard would shatter all over the floor,
to be nicely soaked up a few moments later by the contents of our clothes cupboard. Sardine-
scented socks – truly, there is nothing quite like it.

At Townsville we got the ferry over to Magnetic Island. One of our aims was to go diving but,
as luck would have it, there was what the Tourist Office lady called a Rogue Crocodile out and
about. Four metres, she said. Salt water crocs are very aggressive, she said. No diving, she
said. No way Jose, she said. Well, at least she didn’t call me Sheila. We did do some jet skiing
however, but I was so convinced that the Rogue Croc was nearby that I clung like a demented
limpit on to my handle bars and rapidly gave up.

We located the rock where Bruce had broken his foot forty years earlier. The rock had not
changed, though the shape of the beach had. We dug around trying to find the saucepan that he
buried there, but the Rogue Croc had had it. 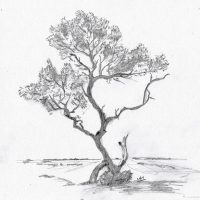 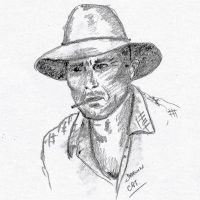 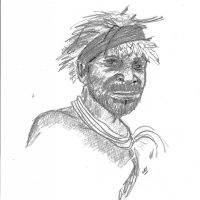 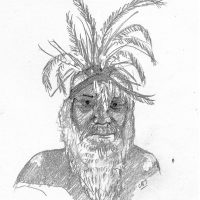 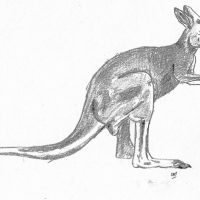 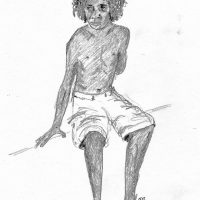