We restored a huge old house in France. Part 7. 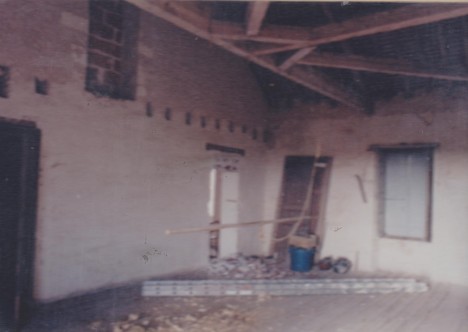 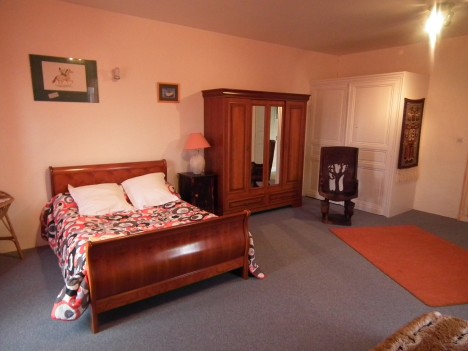 (the same room as in cover photo)

The top floor of Rochebonne had clearly been intended for residential use because fireplaces had been installed.  Unlike the fireplaces on the first floor, which are marble, these ones are in cut stone.   However, that was all that had been done.  The huge space had not been divided in to rooms and there was no electricity.

It is a bit of a mystery because the fireplaces and the balcony seem to indicate that it was intended for family use, yet the staircase is very steep, ie more suitable (or so it was thought at the time) for servants.  We’ll never know now, but there was some evidence of it being used to sleep in, judging by the dusty feather pillows and a hard old straw mattress.

The story goes that the staircase, being so steep, was once part of a tower.  The original chateau had been burnt to the ground during the French Revolution and was apparently much bigger.  So it is possible, even likely, that there was a tower at some stage.  My husband, however, tells me that this is not architecturally possible unless the staircase, which is stone, was dragged from somewhere else and somehow hoisted up to second floor level.  This is rural France, not ancient Egypt, or even Versailles, so that seems equally unlikely.

The first thing to be done was to clean the place out.  We set up a kind of watch-out system whereby one of us would stand outside guarding the area and the other would hoist the old mattress or whatever to the balcony and haul it over  in to the skip.  It took three skips and two days to clear the old rubbish out.  Nowadays I wish I had paid rather more attention to what we were throwing, though we did keep a great deal – old farm implements, old scent (?) & medicine bottles, several old photos whose sitters we were later able to identify from the church records and old housekeeping books – but that was much much later, long after the children had grown up and I was no longer so busy.

We split the area in to three huge bedrooms, two shower rooms with WC, one small bedroom and a big play/chill area for the children.  For a long time, having also installed central heating and electricity, we couldn’t afford to do anything else, so the children just lived in it as it was with bare plasterboard walls and chip board floors (lain over the rotting floor boards already in situ). Two or three years went by before they even got curtains, never mind carpets, but they didn’t mind – children don’t – and they loved being able to decorate the walls with hideous monster drawings and picturtes cut out of magazines. 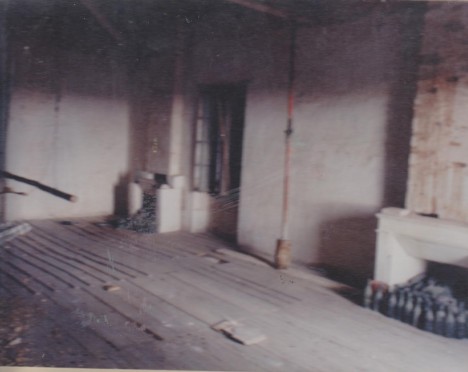 Another thing we did was to install a bell system. I can never understand parents who shout out at their children but in this house it seemed seriously the only option.  So then I had an electric bell I could ring.  Upon hearing it one of the children would appear on the top landing, look down through the stairwell, and I would be able to say “show me your homework” or “supper is ready” or whatever.  My book “A Call from France” was originally called “The Calling Bell” with this bell in mind.

A ceiling had gone in to one half of the space covering the top floor, and boasted a ladder which led to the attic above.  It was a shame to put ceiling under the marvellous old beams which covered the remaining space, but we had neither time, energy nor money to do otherwise.  On a practical side I felt the children might feel their bedrooms were perhaps slightly spooky if there were huge old beams and high spaces.

The chill/play area became, just a few years later, the unofficial youth club where out elder son hung out with all his mates.  The noise and the mess was unbelievable, but I preferred them being there where I knew what they were up to (or so I thought) than out somewhere dubious.