Travels with a Biro – Venice. 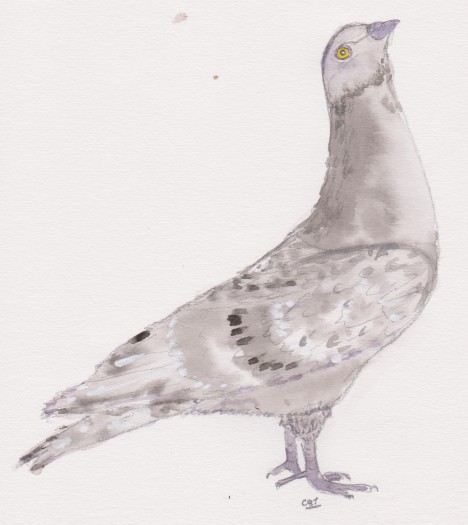 Somebody put a photo of a gondola on Facebook yesterday, and it made me remember the last time I was in Venice, about … I suppose it must be eight years ago now.

There are all the obvious things to say about Venice – the gondolas (or gondola traffic-jams more like!), St Mark’s Square, the Bridge of Sighs and all that.  It is a most fascinating city, that cannot be denied.  But my two strongest memories of that city, I am afraid, are both about poo.

Yes, sorry about that – don’t read on if you don’t want to.

We were with our caravan and camped in a huge campsite over the water, just outside the city.  It was a beautiful spot overlooking the estuary; there was a water-taxi to take you to the town several times a day.  It was mid-September and we had timed it on purpose, hoping that the worst of the tourists would have gone – and perhaps they had, but it was still unbearably crowded.  What flabbergasted us was the quantity of tourists taking photos of …. wait for it … pigeons.  Yes, pigeons!  In St Mark’s Square there are a lot of pigeons, some very tame because of the constant presence of tourists, and all of them a very big nuisance. Almost a pest, in fact.  Instead of taking photos of the gondolas and the cathedral, tourists took photos of the pigeons. Well, I suppose they took photos of the pigeons as well as all the amazing sights.  But it still seemed extraordinary to me.

Anyway, we left George, our Great Dane, tied on a long lead by our caravan, told him to guard and promised we wouldn’t be long. We were never long.  He was an exceptionally good dog, but he liked company, and he was also very old, so we couldn’t leave him long.  He was too old to tramp the sweltering Venice streets with us. So we left him.  When we got back a large German lady in a neighbouring caravan came over to us.  She flapped her hands in order to get our attention and George nuzzled her as she approached.

“It vas no trubble!” she exclaimed, still rather loudly. “I hev zis dogs at home in GERMANY!  Very gentle dogs.  I vas wotching  him and I see he need a poo!”

“Ze poo !” she held one finger up in the air as though she was teaching us a new word. “I ask ze English family over zere (she pointed) and zey tell me zis word!”

“We’re very grateful … thank you so much …” we ventured.  George was infact very good about holding on.

“I tek George to ze woods!” another finger in the air, “and he do his poo!”

She patted him and told him he was a good boy.

“Now he is fine, very fine,” she said more quietly.

We thanked her again and she went away.

The following morning I was in the eblutions block, minding my own business, when I became aware of a boy in the toilet in the cubicle next to me. It was clearly a boy of about, ten, I estimated.  I could tell because I am the mother and grandmother of several boys, and I knew by the indiscreet plopping sounds and the unabashed heaving sounds, not to mention the delightful smell, that next door to me was a boy.

I left my cubicle and went over to the wash stands.  Just as I finished washing I glanced in the mirror and saw behind me that the boy was emerging …. except that it wasn’t a boy.  It was a nun !!!

Click below for “A Call from France”, a true story and voted a must-read for mothers:-