Things you need to know before your parents get old. 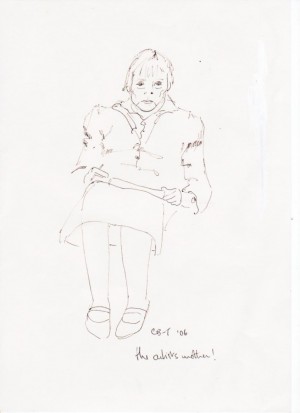 Sketch of my mother when she was about 88.  I see she has a book in her lap and a pencil in her hand – that was so typical of her; she had been a professor of Latin and, even when she became vague and forgetful, she still read and wrote in Latin.

Last night I came across a note card from my mother, written – in the wobbly hand of an old person – about a year before she died.   She had written : Looking forward to seeing you in September and hope your tooth is better.  For myself, I am getting more and more stupid.  I’ll go and do some gardening. That’ll knock some sense in to me.”

It made me want to cry.

I regret so much not learning a bit about old people before my mother died.  It would have helped me and my siblings to cope with her and to help her through her old age.  Mark you, we were all very good to her and she lived in comfort surrounded by a caring family … but I often look back and feel that had I known more then, I’d have done more, she’d have felt better then and I’d feel better now.

There is a lot you can learn about in advance that will make your parents’ old age not only better for them, but better for you too. 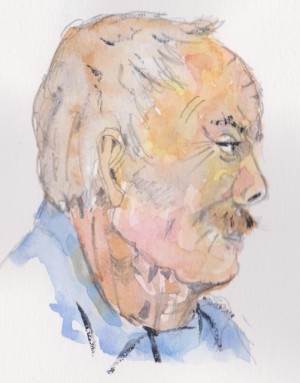 I did this sketch to go with one of my stories.  It is the abuelo in Saying Nothing.

Let us first of all look at what “old age” means.  Not so long ago you were considered old when you hit sixty, but this is no longer the case.  Sixty is middle-aged and a huge percentage of people carry on working through their sixties. ( I absolutely insist that being in your sixties is middle aged because I am sixty-two!)  So, old age has become older, and I think we can safely say that old age starts when you start to exhibit the four main signs of old age, which fit, loosely, in to four neat categories:-

My mother refused to get old.  She was still a naughty girl, and took delight in it, when she was 86.  Fit, both mentally and physically, she thought nothing of playing on Master Mind (and winning!) or walking all day or or travelling to the other side of the world.  And she did these things, all of them.  She rejoiced in it with a grim determination that she was absolutely not old. 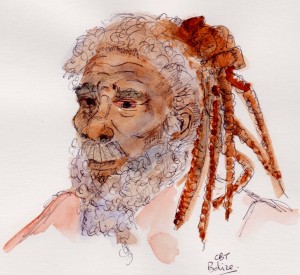 quick sketch done while in Belize

When your body is starting to give up. When you are getting all the aches and pains. Your eyesight has gone badly downhill, you cannot crouch on the floor to get under the sink … you are getting biologically old.

Old bones are marked by “thinning and shrinkage.” This results in a loss of height (about two inches by age 80), a stooping posture in many people, and a greater susceptibility to bone and joint diseases such as osteoarthritis.  My mother shrunk from a good 5’8″ to something around 5’4″, though I was not aware of my father shrinking.

My mother refused to get biologically old till she was at least 88 or so.  She was agile and quick long after most folk have slowed down.  She had always been a keen cyclist and a keen walker and – sometimes against huge odds – she kept it up as long as she could.  Sadly, she always refused any kind of help – a hand to assist when she was getting out of the car. That sort of thing. She saw it as a weakness, and that was a shame. 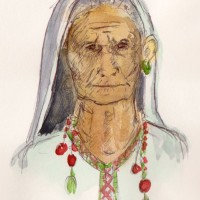 quick sketch done while in India

It’s all about how you feel, isn’t it ?  If you still feel young, that is great.  I feel some thirty years younger than I am.   The way we feel about ourselves is largely decided by how we look as much as our physical abilities.  There is nothing worse than an old lady dressed up like a teen, but old ladies can and do wear trendy clothes and have snazzy haircuts.  The days of permed hair styles has long gone, along with brettles and brogues and A-line skirts.

The way other people see you, the sort of things you join in on, the way you dress, your attititude in general.  It seems that, as more and more old people join in society, the more they are accepted in society. 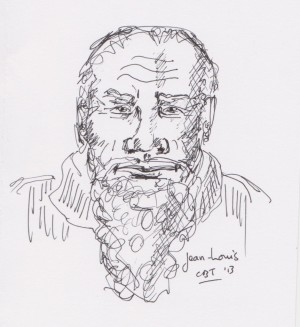 What I did not twig, as my mother got older, was that the change from her being fiercely independent, active, agile, energetic and chatty could happen so suddenly.

It really seemed that one day she was the way she had been since the year dot and the next day she was – just for the fun of it, we thought – being difficult.  My numerous siblings, who saw her on a weekly basis, all mentioned (indeed, complained) that she was constantly being awkard about somethingorother.  She had always loved to be different and to do the things that nobody else would think of.  She now seemed to carry this forward in to sillyness and would lie down on the floor and declare she had fallen over, or suddenly make a huge issue about wanting cranberry juice, or cabbage or oranges.  She seemed to live on those three things only.  She was a devout Roman Catholic and began going on and on ad nauseum about who was to drive her to mass on Sunday … and it seemed to us that she was just being naughty.  She relished the extra attention and would be a real bore in order to get the extra attention.   In a matter of a few months she had become stunningly thoughtless; she became very possessive of her belongings (each and every bit of her jewellry, by the by, was stolen by carers and cleaners) and clung on to her handbag as though there were bag-snatchers in her very house. 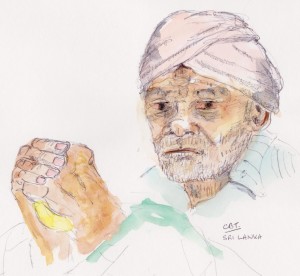 A long time went by before any of us realized (and there are 2 doctors among my siblongs) that this was the onset of dementia, that our mummy as we had known her had gone away, to be replaced by this frail and slightly daffy old lady that we didn’t recognize.   Her hearing and eyesight remained sharp and her memory was fine for the things that interested her.  Perhaps that was why we didn’t see dementia – I mean, she was just fine a lot of the time.   We all visited her (one of us every day – she was in her own cottage) and watched out for her, took her out and about with us and tried to be patient … yet we all missed the point completely. 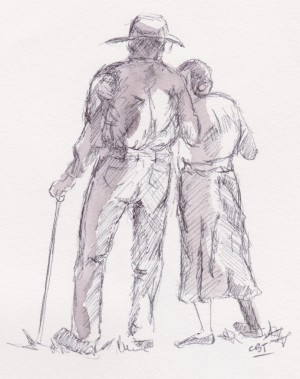 Can’t remember where I did this .. I think it may have been in Mexico.

Before your parents get too old know the following:

– old people do not wish to be old.  Some accept it but some battle against it. Allow them their battle.  Humour them if needed. My mother refused to stop driving long after she had lost her licence. One of my numerous brothers disabled her car, but all she did was call the garage to come and fix it.  When we tried to reason with her, she would exclaim “but I drove an ambulance throughout the war!!”

– as they get older everything fades … sight, hearing, strength … they don’t enjoy it.  They don’t like constantly asking you to repeat things; it is as tiresome for them as it is for you.  Don’t make the mistake of thinking they can’t hear – sometimes they can !

– old people get bored and lonely; they need you to break up the day. They often enjoy the simplest things. Conversation can be difficult.  I used to take patchwork to do when I was with my mother, and she enjoyed watching me and conversation didn’t matter so much.

– old people like to talk about the past, often the only thing they can remember.  I wish I had found out more about the war years and about her youth.

– old people like to talk about their health, and boy oh boy does that get tedious !  I remember getting cross with my mother and telling her to stop going on about her bladder but to tell me something about (off the top of my head and in desperation for a better subject) living in the Congo. And she launched in to a really interesting story about not getting eaten by crocodiles.

– old people are more prone to falls, sickness and disease. Watch out for them, because things will only get worse for them and for you.

– sometimes they are afraid. My mother was never afraid of crime or of a storm but many old folk are, understandably, frightened of the big world around them that they can no longer handle

– old people can’t “take it” the way younger people can – I am thinking fo the noise the children make, or that radio blaring away

– they need distractions … they love to be taken out for a drive: something easy, where all they have to do is sit and look and chat with you

– most of all old people want and need the ones they love nearby; they need patience and kindness even when they are being such a pain. 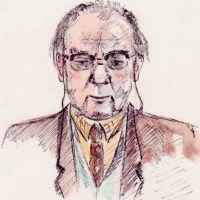 Catherine Broughton is a novelist. Her books are on Amazon/Kindle, or can be ordered from most normal sources.