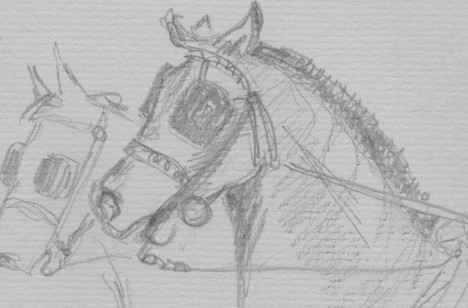 Stuck for something to write, I said to my husband “say a word, any word”.  And he said TIMBER.

Timber ? Right.  That is a good word and it immediately made me think of my grandfather’s story.

My grandfather’s father was called Samuel, and his father before him was called Walter.  Walter was a coal miner in the West Country. (For my Amercian readers, I mean the western area of England; we call it The West Country – it is very beautiful).  He was married to one Enid and they had two sons, Samuel and his brother Thomas.  While the two boys were still young, Walter was killed in an accident in the mine, leaving Enid destitute.  This was probably around 1850 or so.

Enid could find no work in the little Somerset mining village, where almost everybody was equally poor, so she decided the best thing was if she packed up her few belongings and tried her luck in one of the cities.  Her son Thomas was only six years old, whereas Samuel was almost ten.  Furthermore, Thomas had a pair of sturdy shoes, whereas Samuel had only some home-made clogs.  To get to the nearest city, which was Bath, involved a lot of walking for several days, so Enid decided to take Thomas with her and leave Samuel with her mother, an old lady in poor health, equally destitute, but willing to keep the boy. She lived in an isolated one-room cottage in the woods.

Enid and Thomas were never heard of or seen again. They both disappeared in to the dark world of the sick and the poor, and we can all imagine what may and may not have happened to them.

Samuel, however, has a story.  An amazing story.

His grandmother cared for him as best she could for several months then, soon after Samuel’s tenth birthday, she died.    She told her grandson several times, in the weeks leading up to her death: “Don’t tell anybody I have gone unless you have to.  They will put you in an orphanage. That will be worse for you.  Try to keep it a secret till you turn thirteen.”  So the ten year-old dug a hole in the woods, hauled his grandmother’s body out, and buried her in a shallow grave.

The lad made up string, as his grandmother had taught him, and then set about the woodlands collecting kindling for firewood.  It was essential the kindling was properly dry, so he brought it back to the little cottage, and laid it out in the sun, or laid it by the fire if he was able to light a fire for himself.  He bundled it up in to farthing* bundles, once it was properly dry, and went door to door selling it.  It took him almost an hour to walk to the village each day, an hour back to the woods to collect more twigs.  He became known for it and because the kindling was always good and dry people soon got to know that he was the best one to buy it from.

He was weak and thin and bedraggled.  People took pity on him.  Sometimes people gave him a crust to eat.  He couldn’t carry more than kindling because he simply wasn’t strong enough.  Time went on.  He began to have a reputation and he found that folk started to come round to his cottage to collect their kindling in larger quantities.  He worked seven days a week, from the moment it was light to the moment it got dark.  The farthings piled up, and he was able to eat better and heat the cottage in the winter.  He was then, as time went by, able to collect large pieces of wood, then he took on a lad to help him.  He was almost fifteen before anybody asked after his grandmother!

By the time the First World War broke out, Samuel was one of the wealthiest timber merchants in the British Isles.   He died an old man, in his own bed, in the big house that he had built next to his timber mill.

* a farthing was a quarter of an old penny, discontinued

long since, in today’s money worth perhaps half of one