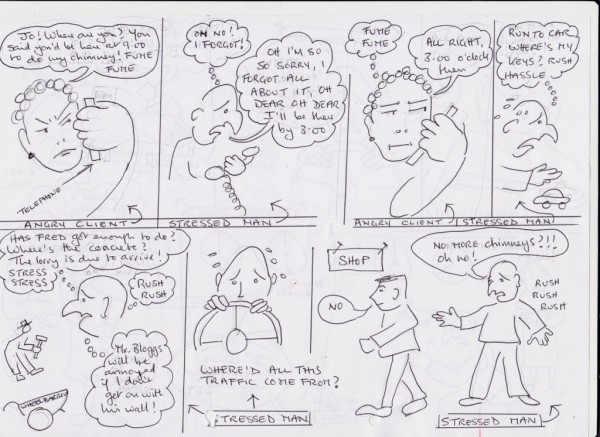 The pictures go from top left to bottom right.  This is a builder called Jo.  Builders are often found to have the building skills but not the management ones, so they find themselves in a stressy situation more readily than others.  Clients don’t realize that the builder usually has to balance two or three jobs at the same time in order to keep a flow of work going for his men and to keep bits of money coming in.  Furthermore, because no work is ever guaranteed he has to take on as much as he thinks he can cope tih to cover his back when there is no work.

Picture 1.  The client phones, fed up and disappointed because the builder hasn’t turned up as he said he would

Picture 2. First mistake. Jo admits to having forgotten. He’d do far better to say something encouraging to his client like “I’m getting there as fast as I can, sorry about that, delay at the office, important delivery that couldn’t be avoided … or whatever.

Picture 3. The client is annoyed. I don’t blame her!  She agrees to 3.00 however

Picture 4.Jo rushes around trying to get everything in order so that he can get to the client.

Picture 5. It is important that he leaves his labourer with enough to be getting on with and it is equally important he can trust the labourer to get on sensibly.  Jo is worried because he was intending to go over to Mr Bloggs.  He is therefore torn between the angry client and Mr Bloggs.  Whatever happens now, both will be annoyed.  And the client for the site where he leaves Fred will also be annoyed that Jo has left the site.  Jo has now made three more mistakes.

Picture 6. Everything seems to take so long. Traffic has built up, the car wouldn’t start, he needs petrol ….

Picture 7.  He goes to fetch the materials he needs for his 3.00 client, only to find that crucial bits are out of stock. 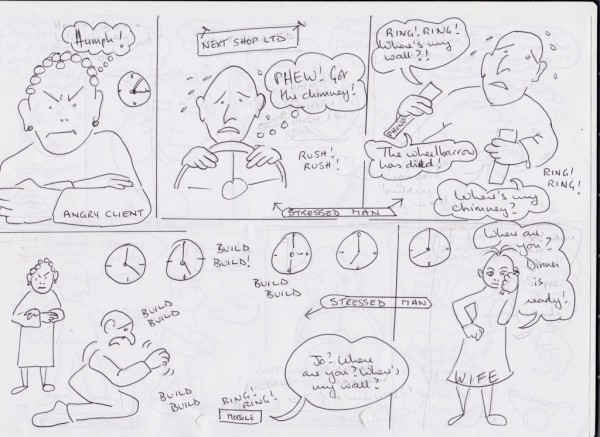 Picture 8.  The client is cross as three o’clock comes and goes.

Picture 10.  Poor Jo is hassled from all directions. Fred has a puncture in the wheelbarrow and cannot get on. His mobile keeps ringing with various messages.  The client is annoyed that the work has barely started.  Time moves on and it gets later; the later it gets the more tired Jo is and the more irritated the client is.

Picture 11.  And then the wife phones.  Luckily she understands, though she does get sick of it ….

Catherine Broughton is an artist and an author. Her books are on Amazon or can be ordered from most usual sources.