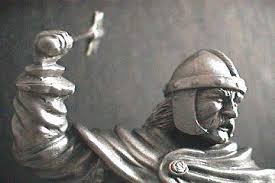 Continuing with my series of French History in a nutshell.  Today I have chosen Charles Martel.  It occurs to me that perhaps I should first of all give a brief explanation of how what  we now call France was divided and who the various rulers were … perhaps I’ll do that one tomorrow.  Meanwhile:-

Charles Martel was the de facto king of Francia.  Francia was essentially most of, but not all of, the north and the east of France.  After the fall of the Roman Empire (by 470 AD) and the retreat back to Rome of the Romans, a Germanic tribe called the Franks took over the region.  Other regions were Austrasia, Neustria (now Normandy), Brittany, Bourgogne and Aquitaine.  The real king of Francia was one Clotaire IV, but he was king in name only and it was Charles Martel (and his father before him) who held all the power and who ruled.  Indeed, one of Martel’s sons, at a later date, asked the Pope to decide who ruled: the one with the title or the one with the power. The Pope nominated the power. 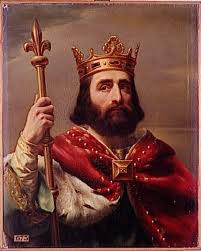 Hier to the throne

Hier to the power behind the throne would be more accurate. Charles Martel was the illigitimate son (one of several) of the ruler Pepin and his mistress, a noblewoman named Alpaida.  Pepin’s legitimate sons all died before Pepin did which left the illigitimate sons fighting for the position.  It was an immensely powerful and wealthy position as leading statesman and military commander.  Pepin had named his legitimate grandson, a child of eight named Theudoald, to follow in his footsteps, and the child’s mother, Plectrude, had Charles Martel imprisoned to be on the safe side.

But the Franks did not wish to be ruled by a child and its mother, and support for Charles grew. He escaped from prison and named himself Prince of Francia and Duke of the Franks.  He was immensely popular, a skilled administrator, a great warrior and an enigmatic character who people wanted to follow. 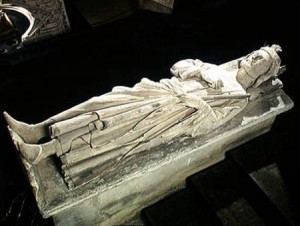 His nickname “martel”, from “marteau”, meaning a hammer, was probably only given to him in later centuries by chroniclers. Like so many of his like (the Lionheart being the classic example) he is best known by a name that was presumeably attributed to him long after his death.

Charles Martel is best known for beating back the Sarrasins (Arabs) at Tours.  They had ruled Spain for centuries and had slowly seeped in to France.  The Battle of Tours is also known as the Battle of Poitiers.  He is also credited with the introduction of the feudal system and of knights – though there is no information to verify that.

By the time he died Martel had united most of the other areas of what we now call France, only ever losing one battle.  His legacy was the start of the Carolingian dynasty, the most famous being his grandson, Charlemagne … which makes me realize I haven’t done Charlemagne yet. One of my favourites ! 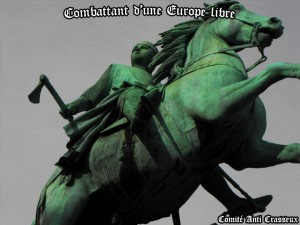 Catherine Broughton is a novelist and also the owner of holiday properties in France.