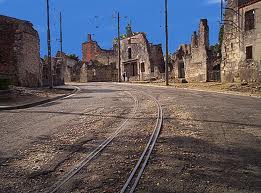 Oradour-sur-Glane is a village towards the centre of France, about 3 hours’ drive north-east of where we live.  It is surprising how few people, other than the local French, have heard of it, and it is one of those places that everybody should visit – or somewhere similar – at least once in their lives, to help us understand what happened.

When, towards the end of WWII, the Normandy landings hit “Operation Overlord”, the German high command wanted to assemble as much as possible of their forces.  They could not call in the forces they already had in northern France because at that time they were still expecting the British and American landings to be in the Pas de Calais.  So they called in the armoured and mechanized divisions available from the south of France.

Three divisions started to move towards the north of France, and they met resistance from the French Maquis (resistance) all the way. One of these divisions was the SS Panzer Division “Das Reich”.  An officer from their party was kidnapped by the Maquis and held in a village called Oradour-sur-Vayres.  It is supposed that the Germans confused Oradour-sur-Vayres with nearby Oradour-sur-Glane, though they could have picked on any village.

Of the population of 668 people living in Oradour-sur-Glane, 642 were murdered.  Of these 196 were men, 247 were women and the rest were children, to include a one-week old baby.  The women and children were herded in to a church and the men in to a garage.  They were shot in the legs so that they were not killed and could not run, and then they were set alight.

The carnage had the desired effect in that the Maquis then stopped all sabotage manoeuvres, and the SS were able to continue their journey north with no further hindrance.

This was not the only “collective punishment” village of WWII – there are twenty others to include more in France, and also Holland, Poland, Greece, Czechoslovakia, Russia and Italy.