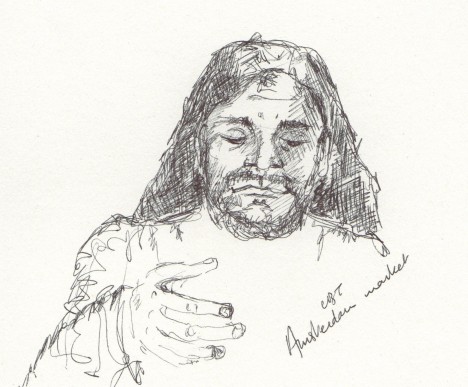 I saw a lovely photo on Facebook today, taken in Montmatre.  It made me remember an incident when Bruce and I were young and we spent a long week-end in Paris.  We had an amazing bit of luck because, wanting to spoil ourselves, we checked in to the Hotel George V.  We found it disappointing, but it was a long time ago now and things have changed.  The lucky part, however, was that they made a mistake with our bill – as we checked out again they handed us our bill and, instead of (for example and in francs) £300 per night they had put (for example) £3 per night.  They straight away said what a silly mistake but that £3 it was !  Lovely !

From there we went up to Montmatre to have lunch before heading back to the airport.  We sat at one of those outdoor pavement restaurants and tucked in to a meal.  I noticed a young couple standing to one side, watching us.  They were aged perhaps 17 or 18, looked studenty and a bit down-at-heel.  We continued with our meal, but after a while the lad approached us.  He asked if we were English – which he was.  He hesitated and then pointed to the bread in the basket at my side and asked if he and his girlfriend could have a bit.

Of course I said and held the basket up.  He grabbed two bits and was about to say thanks when the waiter appeared and shooed him away.  He retreated and the two of them munched almost desperately in to the bread.  We beckoned them back over to us.

“Are you hungry?” I asked (silly question).

We sat them down at the table next to us and ordered burger and chips and glasses of milk for them.  The waiter wanted us to pay in advance for them – just in case, he said.  Well, you could understand that.  We finished our meal, and the young couple thanked us profusely.

“That’s OK,” we told them, “no problem.  In return, however, we want you to remember.  One day you will come across somebody who needs you, and you must – within reason – help them. Okay ?”

And I suppose, if I have a belief, it is that.  Since that day our children have grown up and left home and they have both frequently found themselves in varying degrees of difficulty.  The vibes that were put out by that boy and his girlfriend have carried through the years and in to our lives …. something like that …. and our children, in turn, are kind to people who are in need.  And so it goes on.  That is how the world goes round …. and perhaps that is how evil goes round too ?

(The picture was done in Amsterdam.  Odd that.  I have been to Paris several times but I don’t think I have ever sketched there.)