This was probably the first definable movement of the 20th century.  Between 1901 and 1906 there were several exhibitions in Paris and for the first time the works of Van Gogh (Dutch), Gauguin and Cezanne (both French) were available for viewing to the public.  For many new painters the effect of seeing these great works, which were so different from what they had been taught at art school, was liberating.  It triggered – rightly or wrongly – a landslide of different styles and new ideas.

Just as the name Impressionism came about accidentally, and via an art critic, so did the name Fauvism.  Fauve in French means wild beast.  At the first exhibition of these new artists  in 1905, stood a statue by Donatello, dating from hundreds of years earlier.  An art critic remarked that it was like Donatello among wild beasts.  And so the name was born. 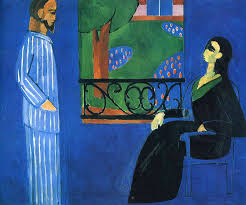 The conversation, Matisse (French) 1909.  Although the style of painting is very naive – a child could have done it – it nonetheless expresses perfectly clearly the stressy conversation between the man and the woman.  He is in pyjamas, she in a dressing gown.  He has his hands in his pockets and is trying to stand stiff and unrelenting, yet the body language of the woman turns him in to a little boy. 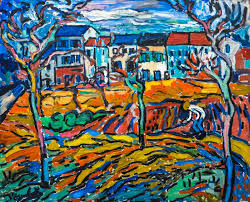 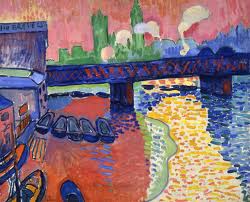 Colour rules supreme in fauvism.  It was a short-lived movement, led essentially by Henri Matisse (1869-1954) who found a kind of freedom in the wild use of strong colour.  Just as Gauguin painted sand pink to try to express emotion, so artists like Matisse wanted their use of colour to shine through and pervade their work, not just on the canvass but “behind” the canvass and behind what the eye beholds.  For these artists colour was a force, an emotion.  This is not profound art, but there is a delight – almost childlike – in the use of colour, in patterns, and the combination of the two.

At around this time Expressionism developed.  This was characterised by exaggerated forms, strong dark lines, sometimes quite sinister.  This art form was strongest in Germany, with a group who called themselves Die Brucke (the bridge):- 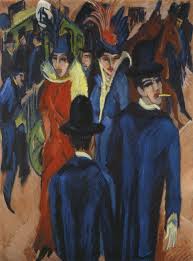 Berlin street scene, 1913.  A hostile and alienating world is evolving; the figures are distorted, the colours are brash.  A lot of expressionist art hides a sense of violence, triggered by unrest that evolved in to WWI.  Ten million people died and there was a jagged underlay of feeling.  By 1919 Hitler had become the propaganda boss of the German Workers’ Party and by 1930 when Hitler came to power any art that did not directly support the Nazi ideology was labelled “degenerate”.

Max Beckmann 1884-1950 was German Expressionist (though he refused to be called that). During WWI he had worked as a medical orderly and the horrors of war show clearly in his work:- 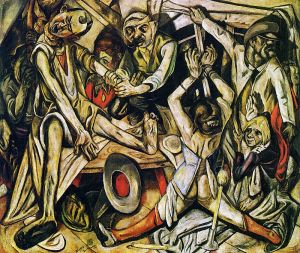 Beckmann suffered terrible depression and hallucinations as a result of WWI.  His images are cruel and brutal, the shapes are flat and heavy.  In this picture we see the horror of war.  Apart from the doctor’s worried face, everything in this picture is gruesome, nasty, frightening. Beckmann escaped to the USA before the start of WWII.

Art had now traversed all borders of the imagination. It had experimented with all mediums and all moods.  Art was now demanding a lot from the on-looker, in a way it never had before.  War was no longer glorified.  Street scenes told it as it was.  There was no room for the romantics nor for  impressions of anything.  The art world now challenged us good and proper. It said to us: this is the reality. Take it or leave it.