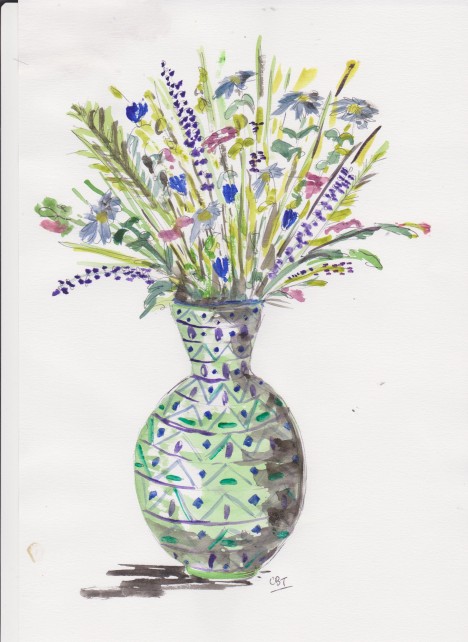 My poor love, who only two days ago was well enough to walk round the shops and buy me these flowers, is in bed with yet another Meniere’s attack.  At least he is in bed.  If he is in a chair he sometimes has to let himself drop to the ground where, he says, he cannot fall any further.

This morning I gave him a small dose of Bromazapam, which seems to help.  It makes him sleep (it is a tranquilizer) and sometimes, if we are lucky, the attack has passed (or at least eased-off) by the time he wakes.

I went straight on to Google, as I have so many times before, determined that I was going to find The Great Cure for him. No, no way.  There are so many different variations of the illness, so many different triggers and so many people with ideas of how to cope with it, that it is impossible to do anything other than trial-and-error.  I did, however, come across a blog which said this:

Meniere’s is a sneaky, cheating, ambushing disease which, after hitting you hard and making life unbearable, goes and hides – only to pounce back at you when you are least expecting it.

Yes, that sums it up.

Something that both Bruce and I are eternally grateful for is that it is not as bad as it could be, nor as bad as it has been.  We remind ourselves of that every day.  It is small consolation, however, when you are feeling sick and dizzy and too ill to stand up.

Meniere’s disease is not understood.

It seems to be generally agreed amid the medical fraternity that it is caused by an excess of fluid in the inner ear. The wrong messages are sent to the brain, resulting in dizziness, vomiting, headaches, nausea and distorted sounds.  A characteristic of Bruce’s symptoms is that (whether he is feeling ill or well) he cannot tell where sounds come from – the telephone ringing in front of him sounds to him as though it is behind him.  He tells me his eyes won’t be still and that they keep “darting off” to one corner.  That seems to me to indicate that there is some kind of migraineous link.

Stress seems to be a trigger in a great many people.  Air pressure seems to play a role.  Any kind of stimulant – coffee, tea, alcohol, even cheese is a trigger.  Loud noises or constant enclosed noises (like a lot of people in one room) could cause an attack.   There also is evidence to suggest that there is a family link, and we wonder if there is indeed an “ear weakness” in the family because our younger son suffers from tinnitus and my late father-in-law went totally deaf as a result of meningitis.  Meningitis can affect victims in different ways, and in this case it was the ears …. so yes, I do think there is some kind of “ear weakness” to be taken in to consideration.

One thing seems to be for certain and that is that there is no cure.  This is an illness that my husband will always have now.  I’d like to be able to encourage him and say that it will go away one day, but the damage to his inner ear is such that there will never be any “getting better”.  So we enjoy the days when he is feeling well, and – thanks Heavens, that is most days – and cope with the days when he is feeling ill.  And we just be grateful that it is not as bad as it could be nor as bad as it once was.

To join the Meniere’s Society:-