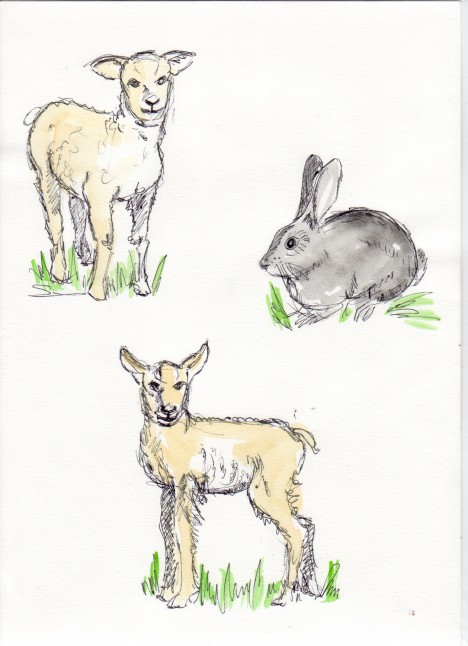 A few days ago while enjoying the sunshine seated outside the Café des Cordoniers, I ran in to an Englishman I had met years earlier and hadn’t kept in touch with.  We shook hands (these continental habits do wear off on one!) and passed the time of day for a few minutes. He used to

frequent the same art shop as I did, sometimes accompanied by a French woman named Francoise.

“And how is Francoise these days?” I asked.  “Haven’t seen her in six or seven years!”

I had no idea.

Correctly named Creuzfeldt-Jakob’s disease, the French authorities kept the presence of mad cow under raps. Where in the UK we saw horrendous scenes of the slaughtering and burning of thousands of animals, there was none to be seen in France.  Both the UK and France identified the disease in 1986.  Britain took action, and France took none.  Four people died in the UK and nine in France between 1996 and 2006 – for the same population.  The French, completely inexplicably, banned British beef from their shops and the French public, thinking they were safe tucking in to their bavette a l’echalotte, were in fact at greater risk that the British were.

I was appalled.  Whether the British over-did their reaction to the disease is, of course, a different subject.  But to do nothing at all must surely be worse.  To this day the French in general are blissfully unaware and at the time there were even notices in the butcher shops saying “no British beef sold here”.

Anyway, Francoise died of mad cow disease. Several years ago.  I finished my coffee and returned home to look it up on Google.  I don’t appear to have a picture of a cow.  I shall endeavour to draw one soon!  Meanwhile here are some lambs.