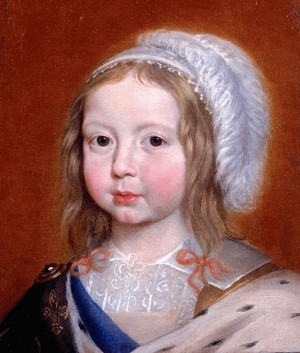 The Dauphin, Louis, as a small child.  The French word “dauphin” translates more-or-less as “heir presumptive”

Louis XIV of France (1638 – 1715) is such an interesting character and there is such a lot of clear documentation on him, it is difficult to condense it all in to a nutshell in my usual way.

He was nicknamed Louis le Roi Soleil (and sometimes Louis le Grand) because of a melange of reasons which included his patronage of the arts, his legal and social reforms for (supposedly) the good of his people, his flamboyant life style, his many mistresses, his love of theatre and ballet and general dressing up and, not least, his extraordinary palace at Versailles.  He was only a little four year-old boy when he inherited the French crown, and was almost immediately catapulted in to polical tensions and fights over power. 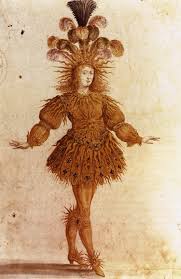 Louis dressed up as the sun (which I daresay also helped to trigger the nickname).  In those days ballet was nothing like the ballet we see nowadays.  It originated in Italy and was called “balletto” and was basically a short play or a sketch where participants, which were usually the nobility, dressed up and danced or pranced their way across the stage.

On his deathbed his father, Louis XIII, had set up a Regency Council to reign on the child’s behalf.  The old king appointed his wife, Queen Anne (from Austria) as head of the council but, no sooner had he died, she overturned his will and set up a new council with her and the Cardinal Mazarin in full power on little Louis’ behalf.

Unusually for those days, she was very close to the little boy.  They had an affectionate relationship and spent almost all their time together.  This was an era where children of royal birth were frequently sent away in to households of their own, and all parenting was done by nannies and nobility.

In 1648, when the young Louis was ten years old, the revolution called La Fronde started.  This was a revolt by the nobility, who had immense power, against Queen Anne and Mazarin, but for (they claimed) the young Louis.  Mother and son were kept more-or-less in house detention in Paris off and on for five years till, in 1654 Louis came of age (16) and the revolt became pointless.  It was, however, to have a profound effect on Louis who thenceforth detested Paris and remained wary of the power of the nobility to the end of his days.  Indeed, his palace at Versailles was built precisely for that reason: to be away from Paris and to keep the nobility all under the same roof – and for the love of opulence. 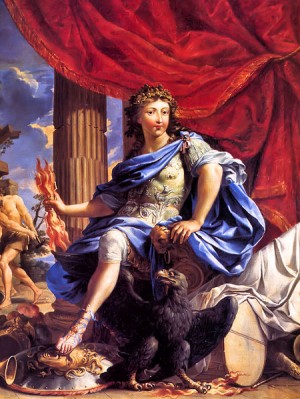 The boy-king portrayed as Jupiter, the King of the gods in Roman mythology (Zeus in Greek).  He is easily identifiable by the thunderbolt he holds in his right hand, and his sacred creature, the eagle.  In the background is an oak tree, his sacred plant.  In front of this is what I assume is his son, Perseus, who killed Medusa.  Jupiter stamps his foot on a picture of Medusa on the sheild; the sheild tells us there was a fight.  The red background draperies signify royalty and the blue cloak reinforces the notion of a sky god.

Louis XIV believed in the divine right of kings and monarchial absolutism.  The terrifying power of the nobility was brought to an end. His exact words were “Up to this moment I have been pleased to entrust the government of my affairs to the late Cardinal. It is now time that I govern them myself. You [he was talking to the secretaries and ministers of state] will assist me with your counsels when I ask for them. I request and order you to seal no orders except by my command . . . I order you not to sign anything, not even a passport . . . without my command; to render account to me personally each day and to favor no one”

Three wars raged with France during Louis’ reign, but the king nonetheless was able to bring the country from one of near-bankruptcy to one of power and esteem.

In 1660 the young Louis married Marie-Therese of Spain.  They had six children, of whom only one survived.  Louis, however, had no less than fifteen children by his mistresses, all of whom survived and were married to members of the nobility.  Marie Therese died in 1683 and Louis secretly re-married one of his mistresses, the Marquise de Maintenon. 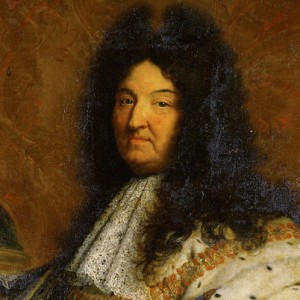 Although Louis gave the impression of virile good health he was, in fact, frequently ill as is shown by the journal kept by his doctors.  He had almost constant painful ulcers, abcesses and boils in one part of his body or another.  He died of gangrene, in great pain, a few days before his 77th birthday.  He was the longest-reigning French monarch.  Both his only son and his grandsons had died before him and the throne was inherited by his great grandson, a child of five.  On his death bed he said to the little boy : “be a peaceful prince that you may apply yourself to the alleviation of the suffering of your people”.

Interested in France ?  Book your holiday in the sunny Charente Maritime. Go to www.seasidefrance.com or send an e-mail to [email protected]