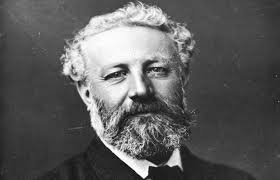 “Twenty Thousand Leagues under the Sea”

Jules Verne was born in Nantes in 1828 to a bourgeois family. He had one younger brother and three little sisters. His family, on both his father’s and his mother’s sides, were well-heeled and well-connected.  His father was a lawyer and both sides of the family had vested interests in shipping, merchant vessels and seafaring men.  From an early age, Jules’ imagination was fed with sea-adventure stories.   The Verne family owned a holiday house on the river outside Nantes, and the boy was generally surrounded by water, ships and the thought of far-away places.

There is a story that he tried to run away as a cabin boy when he was only 11, but the story is not based on fact at all.  At school Jules did well and, as to be expected, was very good at written work.  Still just a child he produced work that would later be published.  He was prolific, imaginative and determined. 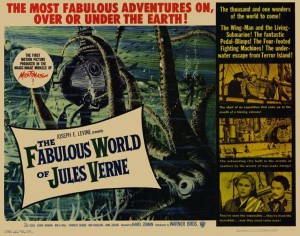 Like his father before him he became a lawyer, but he gave up this profession after barely two years in order to concentrate on writing, despite the drop in financial means.

Jules used his family’s connections to introduce himself in to life in Paris.  The year was 1848, a year of political turmoil in Paris.  It was an exciting time for the young Jules and he wrote extensively, not just adventure stories but also poems and plays.  French writers had started to copy the less starchy narrative and truthful style of the great British writers of the time, notably Dickens, and Jules Verne found this natural and invigorating.  Now mixing with all the right people, he soon became friends with Alexandre Dumas.  He wrote articles for magazines and newspapers, constantly struggling to get a firm footing in the literary world, and constantly nagged by his father – understandably – to return to the safety of a law practice. 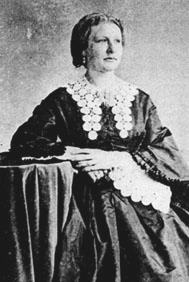 In 1856 Jules married a young widow, Honorine de Viane Morel. She had two children.  Now responsible for a wife and children, he went in to a brokerage business, but still persisted in writing early in the morning before work.  The couple had a son, Michel.  Investing in merchant ships and continuing to write at all costs, Jules associated himself with one Pierre Hetzel, a publisher, who commissioned Jules to write a series of essays for a magazine.  From this experience, Jules created the book Voyages Extraordinaires, which included Journey to the Centre of the Earth.  The book was scrupulously researched, and every aspect of the various adventures was written to be as geographically and topographically accurate as possible.

Jules Verne died aged aged 77.  He had suffered from colitis most of his adult life, and later developed diabetes.  A gun shot wound in his leg (his nephew, who was mad, shot him in a fit of anger) gave him constant pain.   He died in his bed in his house at Amiens and the world lost a great writer. 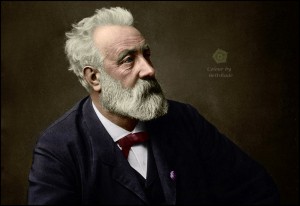 Interested in France ?  Book your holiday near La Rochelle  www.seasidefrance.com.