It happened like this … an English family move to France. Part 12. A Great Dane. 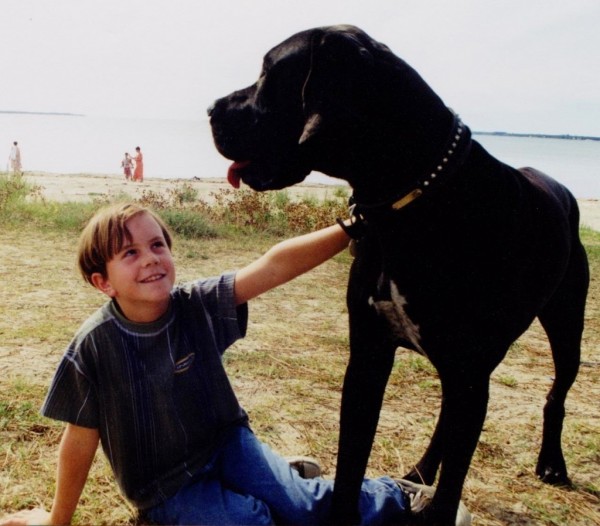 Jake and George on the beach at Marennes

Well, you do, don’t you ?  When you need to set up a new business and you’ve got three children, no income of any note and a huge house to restore, you do tend to get a dog, n’est-ce pas?  All the best people do it.

George was never really a puppy.  We bought him as a puppy, sure, but he was really more like a black blob with four huge paws.  Great Danes, we were told, usually live till they are seven or eight, but George lived till he was almost twelve.  He died while with us  in Istanbul … and that is a different story.

George brought in to our lives a whole different element.  We started walking instead of cycling.  We found ourselves talking about the dog – discussing his food, his bed, his exercise.  Bruce had never had a dog before but I had had three rescue dogs when I lived in Spain even though I am not a particularly doggie person.  He was great with the children, and they were great with him, lovingly dishing up his food and fondling his huge floppy ears (at this time the French were still docking the ears of Great Danes, something which has since been banned thank goodness) and stroking and brushing him.  For some inexplicable reason taking George for a good walk was not on the agenda of any of the children – that was somehow our job.  He was extremely obedient once he got over the silly-doggie teenage days and in all those years we never had to keep him on a lead or tie him; when we told him to keep to heel, he did, and when we told him to stay and guard, he did.  No questions asked.  He would even bark to order and could look quite frightening. 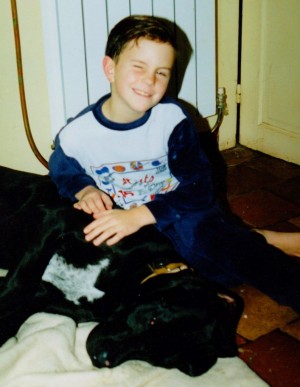 Jake and George.  He was an intensely soppy dog and brilliant with the children.  He was quite posessive of us as a family and, although we never witnessed even the slightest hint of aggressive behaviour, we would not have liked anybody to have put him to the test.  Great Danes are big animals, and George was BIG.

Asked what our aim was in buying a restoring a huge place like Les Cypres, we would have had no answer.  It wasn’t that we had visions of being chatelains and living the chateau life (whatever that is!), and nor was it some idea that we needed a bigger and better house than most.  It had been for sale for something like twenty years and no sensible person would touch it.  In all those years it had stood like a great ghostly blackened hulk at the edge of the village, slowly and inexorably deteriorating a little more each year.  And as its condition worsened, so the giant cobwebs, pigeon droppings, woodworm and dust grew.

But for us there has always been – even now – something about these magnificent old places that was just … addictive.  We were (and are) both very good at seeing through the mess, picturing what can be done, and getting on with it.  We were both also very good at doing things on a shoestring, using up old stuff to make new, and sourcing interesting and inexpensive things from bath tubs to curtains, from roof slates to plaster board, furniture and gravel for the drive and power tools and light switches … 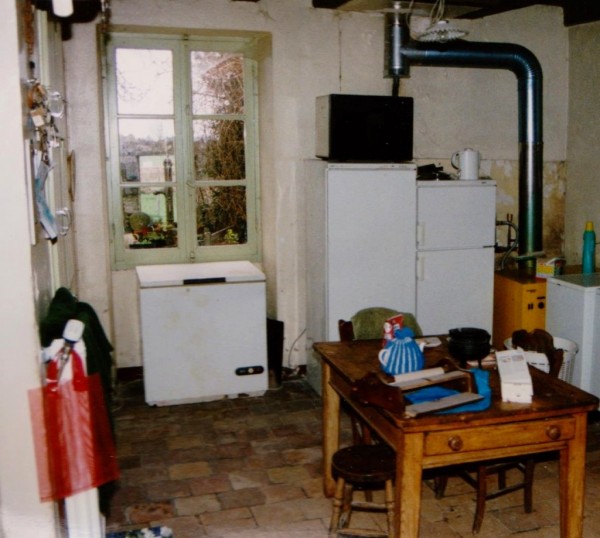 This is now the utility room at Les Cypres.  That little table … the children used to do their homework there and it has had many a layer of poster paints and Christmas card glitter scrubbed off it.  The entire ground floor of Les Cypres has these quarry tiled floors, and some sections in the hall pre-date the existing house which stands on the site of an older property burnt to the ground during the French Revolution.  As these old places have no damp-course, restoring the floor was a major problem.  We had neither the time nor the money – not to mention the energy! – to dig up the floor and start again, but after many trials and errors we discovered that boot polish is the best way to get a shine on the tiles.  It was a hands-and-knees job that kept me fit for many years, though nowadays I have a couple of cleaners in.

To take on a project like this you really do have to be able to turn your hand to anything, seriously anything.  It is no good being able to do parts of the work – the wiring, for example – you need, between you, to be able to do it all.  And you have to be able to “see it” even when things are at their worst.  There were plenty of times we ran out of money and nothing got done, likewise plenty of times we just collapsed in front of the TV in a state of exhaustion after a day at work, unable to lift the smallest hammer or paint brush.

Despite the vision and enthusiasm I shared with Bruce for a lovely house to be really proud of, and despite our joint burning need to see an end to the sad state it was in and had been in for many years, I nonetheless remained homesick.  Had a magic fairy appeared and waved a wand, I’d have opted to go home, no two ways about it.

I have frequently tried to analyse it.  I had already lived abroad a great deal and had worked abroad for four years.  I was made of tough stuff, I was adaptable, tri-lingual, competent, self-assured  … yet felt a homesickness that was sometimes overwhelming.  I think it was a combination of the circumstances under which we lost our home in Sussex, and the nightmare of the Gestapo incident, the house tax episode and the Carte Professionelle fiasco.  Almost as those things had soured France for me for ever.

We knew a lot of people

We still had no friends.  Goodness, we knew plenty of people, but there was no other woman around I could pop in on for a chat, or go shopping with, or compare notes about the children, the school, our husbands, and the general ups and downs of life.  I remained feeling very isolated.  As soon as the house was half-way decent, we invited local people in – the village doctors, the notaires, the farmer across the road.  But nobody invited us back. Not even once.  As time went by we discovered that the Parisian French are vastly more sociable and open-minded, and French friends we have these days are without exception ex-Parisians or French people who have lived and worked abroad. 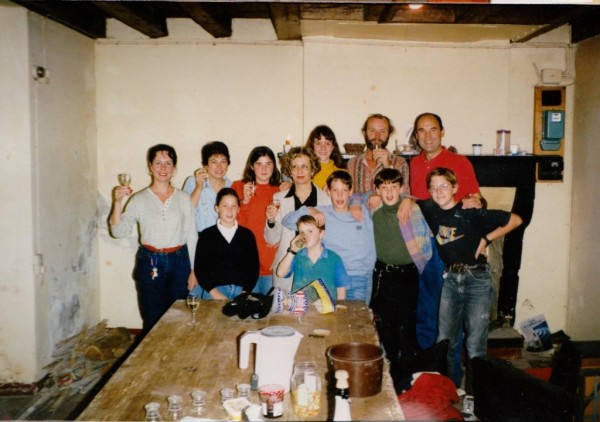 In the kitchen with friends, all French.  That’s me on the left with a red belt.  Building debris all around us!  Several years later that fireplace suddenly collapsed, narrowly missing my cleaning lady who would probably have been badly hurt.

That first winter we dealt with the absolute essentials: the worst of the roof repairs, and hardboard over the perished timber floors.  We also got the central heating going, hot water and a bath tub, one toilet and installed the essentials like washing machine and drier.  Apart from that we cleared and cleaned, then cleared and cleaned again.  There was a huge amount stuff left behind, much of it nice old furniture, but most of it empty bottles, old mattresses and pillows, broken pots and about forty broken chairs.  There were pigeons residing in a room on the top floor and huge quantities of little pots, some of which I kept, which all smelt of strong ointments of some kind.  There were old trunks, some in relatively good condition (use gloss varnish on perished old leather – that works fine), which themselves contained miles of old tablecloths and aprons, pictures, sepia photographs and momentos, old shoes and even silver candlesticks.  In many regards it was great fun, despite everything being dusty, dirty, motheaten and covered in pigeon droppings.  Much of this stuff was carted off in to the numerous barns that were part of the property – they later made 8 houses, to give you an idea of the size of them.  They were largely derelict, but where the roof was intact we stored all sorts of thing from the house; some of it worsened and got thrown away, some of it we sold and some we restored and put back in the house. 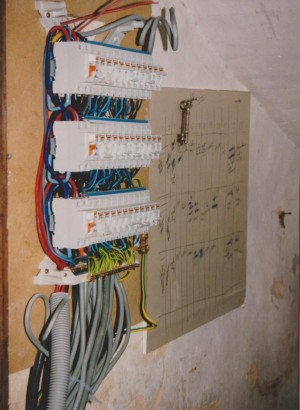 The entire house needed to be re-wired.  The chart on the wall next to the meters show which switches apply to which rooms.  It was quite a feat that Bruce dealt with in under a fortnight.

For me it has always been of prime importance to get the place clean and tolerably tidy, even if everything not only needs decorating, but floors have got to come up or walls be knocked down.  Regardless of anything I absolutely must hang my plates and pictures on the walls (unless decorating is imminent of course), place my furniture and books about and get an overall sense of “home”.  An undecorated room could remain like that for 6 months or a year while we dealt with more pressing repairs and maintenance, and in the meantime I felt I may as well enjoy my stuff.  Seeing my old granny’s plate up on the wall, my encyclopedias on their shelves and my father’s paintings of South Africa over the fireplaces, made me feel some level of familiarity with my surroundings, and quite possibly even spurred me on to get things done.

You just make do

The children’s rooms, up on the top floor, were in the worst condition, but for a year or so it was a giant “dormitory”-cum-play area for them, and they really enjoyed that.  Not needing to worry about the state of the flooring or the walls, they let rip and ran riot up there, doing what they wanted – within reason – till their rooms were decorated at last. 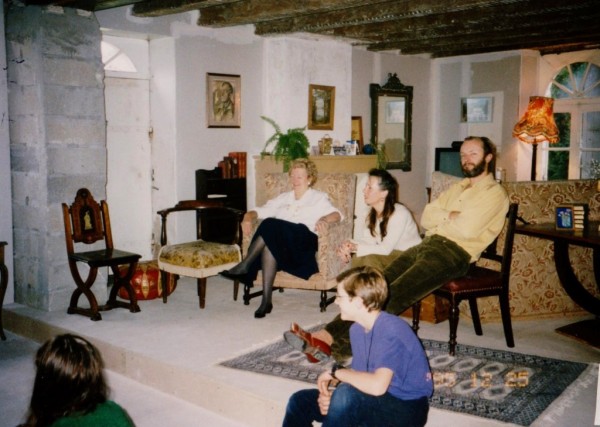 The living room with bare plasterboard/breeze block on the walls, and chipboard on the floor that was so ingrained with dust it went white; no curtains, no lampshades and there were doubtless sacks of cement and tools just out of sight, but all my bits and bobs are out.  That was important to me.  We seem to be watching something – its not the TV which was in the corner behind.  Me sitting between my mother-in-law and Bruce, Pippa and William in the foreground.  I expect Jake, who was about six, took the picture.

In the meantime, of course, Bruce still had his building business and the clients had not dried up at all even though I no longer sold the houses. He had masses of work and the usual stresses of running your own business, building sites, workers who don’t turn up, clients who don’t pay, dealing with attitude from the men/the clients/the suppliers, scrabbling around to find the wages each week, fixing the truck, fixing the digger, bills that cost more than the estimated … and his Meniere’s attacks.

We needed to find another way to make some money.

If you are thinking of buying in France:-

Catherine Broughton is a novelist, a poet and an artist.  Her web site is http://turquoisemoon.co.uk.  Her books can be ordered from most leading book stores and libraries, or from Amazon/Kindle worldwide.  They are also available as e-books:-