Every picture tells a story: on how to read Art. Part 14. 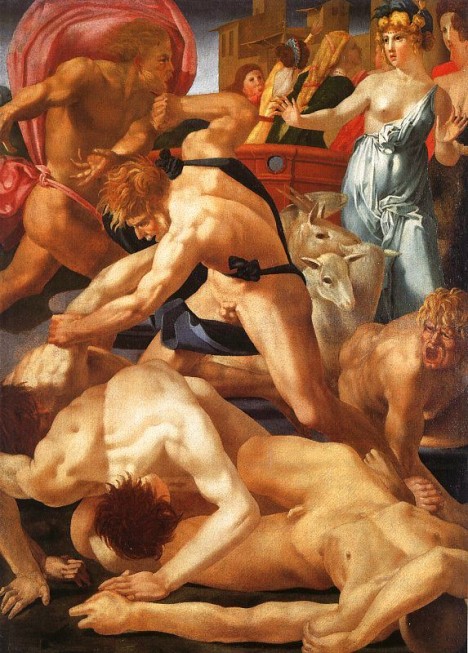 Moses defending the daughters of Jethro.

This scene was painted in 1523 by the Florentine artist, Giovanni di Jacopo, usually simply known as Rosso because of his red hair.

The painting is unusual in that it is full of violent movement at a time when silent and static figures were the norm.  In a way Rosso is showing off (and rightly so) his skills as a figure painter, and his knowledge and understanding of anatomy.  Each male figure in the scene is in a different position, is muscular, and is a study in itself.  The violent movement portrayed is stunning.  The fact that almost all are naked – which is not the case in the story – is simply in order to paint flesh, bodies, human strength.  All the men, to include Moses, are portrayed as madmen, completely demented in their fury.   In the middle of the scene the sheep stand impassively; there also appears to be something that looks like part of a huge bucket. In the background we see the town where the girls live.

The story of Moses and the daughters of Jethro appears in Exodus, in the Old Testament. Allowing for fictive elements, it is more likely that Moses was defending the girls from rape. However, the story goes that the seven daughters of Jethro came down to the well to fetch water.  Some shepherds saw them and drove them away.  Moses witnessed this and came to the girls’ aid.  As a reward Jethro gave his daughter, Zipporah (in blue) to Moses in marriage.