I didn’t like Cuba.  I feel bad saying that because they need us to like it.  Sorry.  Friends said to go before it is over-run by American tourists and changed forever.  Well, for the sake of all Cubans as well as for the rest of us, I hope it is over-run very quickly and that it changes forever.

Because the sad fact of the matter is that had Che Guevara and Fidel Castro left well alone Cuba, which is barely 100 miles from Florida, would now have high employment, there would be plenty of money and everybody would have not only access to a wide range of products but also (more importantly) they would have access to a wide range of possibilities. 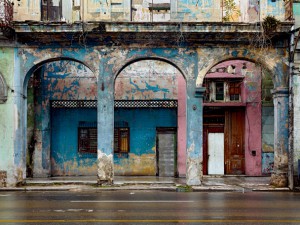 Because, no matter how much we dislike any loud and brash tourists, and no matter how much we disapprove of the archaic American  gun laws, it has to be said that Americans – along with most of Europe –  have openings, ways to move forwards, possibilities … at every turn.  Yes, despite the current economic climate, the USA is still a land of opportunity and opportunities abound across the world in most countries.  And Cuba, so close to the USA, has missed out.

I can all but hear many of you screeching “but who wants a MacDonald’s in Havana?  Who wants miles of cheap-and-nasty shops, or expensive boutiques ? Who wants commercialization and crowds and factories which belch out smoke ?”  But the fact of the matter is that all these things create employment, and we all need employment.  Money begets money and, as Lincoln so rightly said, you cannot help the poor by being poor.

Our flight took us in to Havana, and from the airport we were driven in a 1950s car to our “casa” and our car rental.  A “casa” is a bit like bed-and-breakfast except that you are not (or at least we were not) in the same house as the owners, but in rooms arranged around a yard.  These “casas” vary enormously; we stayed in eight altogether, as we toured the island.  They were all fine except for one which we totally rejected – and  in turn meant that we had to go in to an hotel for the night – which was very expensive.

Tip: if you are staying in “casas” do not take any that are an apartment.  The lifts usually do not work and are excruciatingly slow, with perhaps just one lift for umpteen apartments. Furthermore the other occupants may not be the owners (which is often interesting) but anybody passing through who could pay for a room. 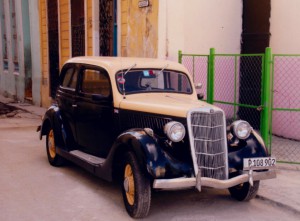 The 1950s cars are fascinating if you are interested in cars – which I am not.  Seeing the first ten or twenty of them was interesting.  They reminded me of childhood.  But twenty was enough.  There are hundreds of them, hundreds of old bangers interspersed with much-loved and highly polished ones, and these were also interspersed with people on horseback or in horse and cart.   I have never seen so many people on horseback or with horse-drawn carts.

Tip: These old cars are all very well, but none of them have seat belts, many are not maintained, and some have no brakes. We had two big scares, one when the passenger door suddenly flew open as we rounded a bend, and the other when we nearly hit a horse because the brakes didn’t work.  It is highly likely that the drivers have no license too.  Keep to official yellow taxis. 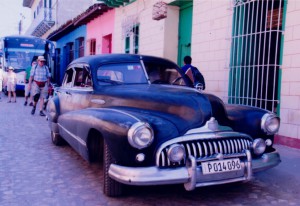 Lord knows, I have travelled a great deal and I have seen poverty in all its dastardly shapes and forms.  But I had never seen this.  It was poverty with a full stop.  Nothing had advanced for seventy years. Everything (or almost everything) was stuck in the year 1959.  What had once been fine buildings were crumbling; wealthy merchants’ dwellings were split in to a hotch-potch of disintegrating apartments.  Nothing had been repaired or maintained for a very long time. It was tragic. 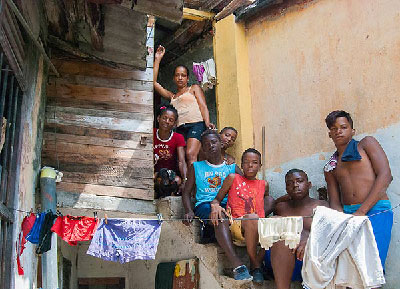 There were almost no shops and the few that there were had nothing in them.  Until recently nobody was allowed to do anything; everything was government-owned and government-managed. The few diminutive commerces that had sprung up could offer very little because there was very little to offer.  Crocheted tops over and over again, T-shirts with exceptionally bad quality prints of Guevara on the front, lots and lots of oil paintings of local scenes … and really nothing else.

I developed a bit of a cough while we were there and queued up, communist style, at a chemist. There is no help-yourself-from-a-shelf.  You queue up at a counter. The chemist, a buxom woman with battle-axe hair, put a box of throat pastilles on the table, and a bottle of cough mixture.

“No, “ she replied, putting her hand defensively over them, “you may only have one”.

As I say, it was poverty with a full stop.

The streets of Cuba

Broken pavements, broken roads.  Litter-free, however.  Smarter tourist areas.   Pot holes even in the “motorway”.  Smiling people, none of them emaciated as you see in India, and – hilariously – all wearing very similar clothes.  The women in particular seemed to be all encased in extremely tight short leggings, regardless of their shape … and the shape of some of these women was something else!   In fact, apart from the USA, I have never seen so many fat women in my life. 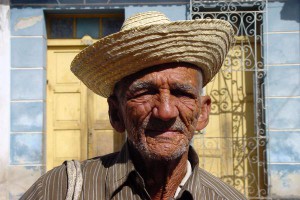 atucally I got this gorgeous chap off the internet; I must sort out our own photos !

Wifi was difficult, though apparently the Cuban authorities are working hard on bringing that side of things up to date.  I’d say 90% of the population is not computer-literate.  They did, however, have quite a crafty system whereby they could phone a local guy with a computer and dictate a message which he would then send, from him, but on your behalf. We found good Wifi in one government-run restaurant in Havana, otherwise there was virtually none at all.

I think the thing that struck me the most was the Cuban total and utter lack of compassion for animals.  Several times we saw horses buckling under the weight of the cart they were pulling, slipping on the stone road.  We saw one horse slip right over.  We saw a dog being dragged along the side of the road; it kept trying to get up but was too weak and the owner simply dragged it along with a rope, as though it was dead.  We saw many exquisite little birds in tiny cages.   Horses, donkeys and mules were everywhere, many of them covered in sores, emaciated and heart breaking.  Even simple things like leaving the creature tied up in the shade was not respected and many stood, head hanging, in dreadful heat. 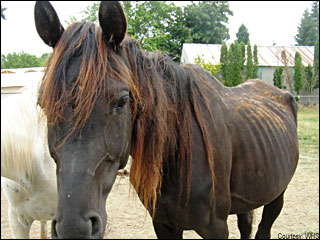 There is an interesting military museum in the centre of Havana, rife with pro-communist propaganda, but interesting nonetheless.  But even here the last entry was dated 1980 as though by 1980 they realized there was no more to say and that the country, although undeniably “improved” from the health and education point of view, had got nowhere – had even regressed drastically in trade, commerce, banking, social evolution and overall progress.  True, everybody now has free education and free health care, but as one taxi driver told me “we spend the rest of our lives paying for it” … because they can have nothing else. There is nothing to be had and nowhere to go.

The country has stood still for seventy years. 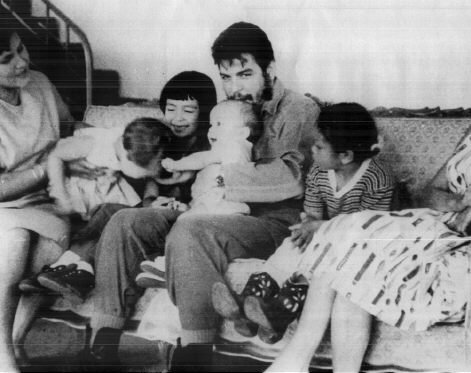 Che Guevara had five children by two different wives, Two of his children still live in Cuba, one being a doctor.

Saying “che” in Argentine Spanish is a bit like saying “hey” in English.  Ernesto Guevara (born Argentina 1928, died Bolivia 1967) had a way of saying “che” as he spoke, hence the nickname.

The famous Korda photo of him is everywhere.  I cannot say he is hero-worshipped; I think the world (even the Cuban world) has moved beyond that and now sees events in a different light. Basically, he was an over-confident man who got himself confused with God, a bad husband and a bad father.

Guevara’s role was triggered by his outrage when he discovered the abject poverty in which so much of South America lived (and still do).  He was a doctor by trade and came from a prosperous family.  He was the eldest of five children and he was excessively intelligent.  By all accounts he was absolutely brilliant at most things and it was perhaps this very mental energy that got him involved in Cuba’s political struggle. 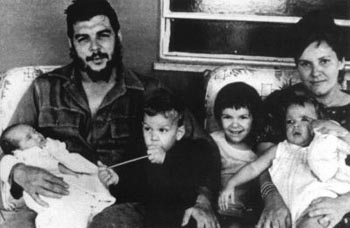 These were the 1950s.  All over the world people lived in abject poverty, as indeed they still do in many places.  I am not saying that poverty being the “norm” was acceptable, but simply that the struggle up out of poverty has been a normal part of the evolution of man.

In France, where I live, women only got the vote ten years earlier. Swiss women were not to have the vote for another eighteen years.  Women did not have the same pay as men in almost any country.  Many houses in “developed” countries had no indoor plumbing – indeed, much of rural France still had no indoor plumbing when we arrived in 1989. The Mafia were rife in Italy and in the USA.  Racial equality in the USA only came in to being in 1968, and in South Africa in the 1990s.   Goodness – WWII had only been done and dusted for fourteen years!  So to expect Cuba to have anything in the form of democratic care for its people, was irrational on Guevara’s part. 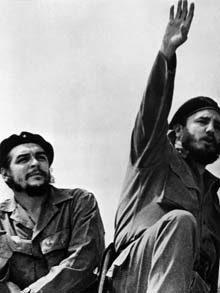 Guevara with Fidel Castro. Castro was born in to a poor family but went on to become a lawyer … which shows that possibilities existed if you were clever, as indeed it has done from the year dot.  He took mostly the cases of poor people who could not afford to pay him and as a result was constantly broke.  The power the USA had over trade (mainly sugar) in Cuba infuriated him.

Guevara and Fidel Castro and their like clearly felt that revolution was the answer, and indeed perhaps it was for a short while.  But something then went wrong.  The revolution was fought and won … free education and health care for all … and then what ?  Nothing.

Catherine Broughton is an author and an artist. Her books are available on Amazon or can be ordered from most bookshopsand libraries.  More of Catherine Broughton’s travels are related in her book “Travels with a Biro”, so-named because she sketches with a biro.