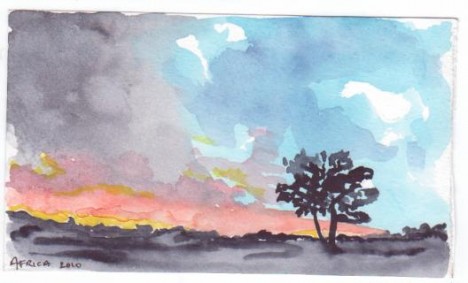 One Christmas my parents hired a house on a beach somewhere north of Pointe Noire (Congo).  What possessed them to do this I have no idea because tourism wasn’t in fashion, or anywhere close to it, and it was a foregone conclusion that the accommodation would be extremely basic – even more basic than our own house and that was very basic with an open fire to cook on and an outdoor WC where you had to clap your hands loudly as you entered in case of snakes.

If I know anything about my parents, however, there was a waterfall somewhere en route which my father wanted to look at, quite possibly an outbreak of some disease in a village on the way which he needed to deal with, and he almost definitely felt it would be good for us children to have a change of scenery.  I expect my mother’s wishes came in to the equation, and the sea breezes that she was bound to find coming in off the Atlantic were almost certainly an attraction.

We drove in our land rover for several hours. At a given point we parked, somewhere on the outskirts of a small mud-hut village and paid somebody to look after our car. As always children gathered around hoping that my father would throw some coins in to the air. We hired some bearers and loaded our gear in to two dug-out canoes in order to cross the river to our chosen destination.  One of the bearers scooped my baby sister up on one arm, and grabbed a bag full of food and clothes with his free hand. Another bearer did likewise with another sister, and yet a third carried more luggage.  Being Big, my older brother and I were to walk.  I clutched on to the shorts of one of the bearers and he gave me a berry of some sort to eat, fished out of his pocket and handed over with a big grin.

As we approached the river we noticed crocodiles basking in the sunshine.  One of the bearers started to turn back, telling my father that it was a bad time to cross:

But my father declared, waving his hand casually in a way only my father could, that it looked as though the crocodiles had already eaten … which I assume they had because none of us got limbs bitten off (at least not that I remember) and we crossed the river to our house a mile or so further along on the other side.

The property was essentially just two rooms with a wide stoep (patio) running around the outside.  In the corner of one of the rooms was a large cast iron bath (how did they get THAT here? asked my mother) with a solitary tap from which, with a bit of effort, rusty-coloured cold water ran.  There were two double beds.  In the other room was a food cupboard, a table and two chairs and a great deal of cockroaches.  Undaunted, my parents set about ridding us of the cockroaches (there was a hand-pump spray kind of contraption that had come with us), made up the beds, and a week soon slipped by playing in the yellow-white sand and splashing in the deliciously cool water.

Christmas day was a feast of bully-beef (corned beef) and evaporated milk.  We each got a set of crayons and a colouring book.  It was wonderful.

I often wonder, when I look back on these days, how it was with my mother.  Most women wouldn’t dream of it, let alone with (at that time) four children on tow (the numbers of children swelled, believe me!)  Yet she seemed to love it.  I never heard her complain and she always seemed sunny and smiling.  But the mosquitoes alone must have been a never-ending battle, never mind other insects and the heat.