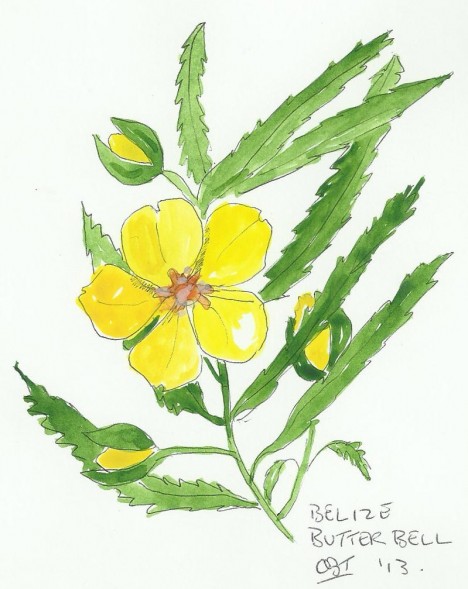 I sketched this little flower when I was out on one of the cayes just the other day.  When I had finished I asked a man sitting on his upturned boat what the flower was called.

“Eeh, mami,” he said, shaking his head and looking unnecessarily glum, “I dun know dat name, no I dunt.”

Turning to one side he yelled something unintelligible to another man who approached and looked at the sketch and at the now half-dead flower in my hand.

“Dat dere is a Yella Bell,” he announced.

“A yellow bell?” I was pleased with this information and started to write it down.

“Nah,” chimed in a third man, a bunch (if that is the right word) of fish hanging open-mouthed from a hook draped over one arm, “dat ain’t no yella bell, dazza Butter Bell.”

“I never hearda no butter bell!” said the first man, “more like izza Corn Loop or a Sun-eye ….”

“Dazza Butter Bell!” he called over his shoulder.

I wandered off, having thanked them for their varying degrees of genius, to find a lady I had been talking to earlier.  I had been unwell and she had spent the morning making me drink coconut water, which had a miraculous affect. She was decidedly more likely to know the name of the flower.

I jotted this information down, feeling that the name perhaps didn’t matter anyway when she added:

Ho-hum ……. a yellow flower by any other name smells just as sweet …..