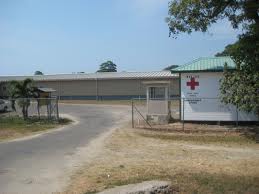 Belize does have a National Health system and all nationals are entitled to free medical care, such as it is.  The country is no bigger than Wales, and that is just as well because health care is limited to towns. The bus service (chickens, somebody’s fridge, the local drunk, crowds of people with babies and children, somebody with a huge bag of pineapples strapped to his back, another with a broken moped … even a pig)  ferries people around, hooting loudly along the roads so that people know it is nearby.

The standard of care, I am told, is inferior to the standard in Mexico and in Guatamala, both neighbours, and quite a few people will travel over the border if they need operations or specific care.  There are several private clinics and insurance is expensive.

I have had occasion to go to the doctor and also to be hospitalized several times in Belize.  I must say I have no complaints whatsoever, though it was all extremely basic.  Simple hygiene seemed non-existent,  and prescription medicines (or any medicines) can be over an hour’s drive away.

My visits to the doctor cost me in the region of 25 BZD (about £8 or 6$), though this seems to vary not only from surgery to surgery but also from one visit to another.  One day the doctor would ask me for 22 BZD and another day 18BZD – or whatever.  It seemed to depend on how rich or poor he was feeling that day. I spent a night in Dangriga hospital and was very well looked after, even though there was no loo paper, no water and no sheets – people need to bring their own, and as I was admitted as an emergency I had none.

I cadged water of a girl in the bed opposite me.  Her name was Dawn.  She was aged 19, a jolly, broad-grinning, big fat black mama-in-the-making.  When the doctor came in to see her he was accompanied by a trainee.  The nurse drew the curtains around the bed.

“First sign!” I could picture the doctor raising his finger in the air on the other side of the curtain. “What is the first thing we notice about this patient that tells us what is wrong with her?”

“Because?” continued the first doctor, “because she is FAT.  She is very FAT. And so we know straight away that there is a likelihood of diabetes.  Fat people tend to go with diabetes.  And this one is so FAT.”

The consultation continued in this vein, and after a while it was my turn. As they turned from Dawn’s bed I heard the doctor say:

“This lady was brought in as an emergency last night. She had no pulse left.”

“So she’s dead?” asked the trainee.

“DOES SHE LOOK DEAD?!” and the doctor flung back the curtian.

I blinked and smiled and did my best to look decidedly un-dead.

After they had gone Dawn sat up in bed.

Before I could thank her for her observant pronouncement, she continued:

“Sumbaddy comin’  ta see yer?”  She leant forwards towards me. “Cause if dey is, I needs some chips. You gonna ask dem to bring me some chips please?”

I gave her an old-fashioned look.

“Yis I knows I’s fat!” she laughed, one of those lovely ear-to-ear belly-wobble laughs, “but I jis loves food.  I jis loves chips.  Deep-fry.  Das what I likes.  I eats chips all day.  Whaz your husban number ?  I can tex him ask him ta bring me sum chips …” and she got out her mobile phone.

I told her I didn’t know the number.  She looked crest-fallen.

Well, there’s no arguing with that ….

More about the author, Catherine Broughton, on the home page.