As I drove out one frozen morning …. 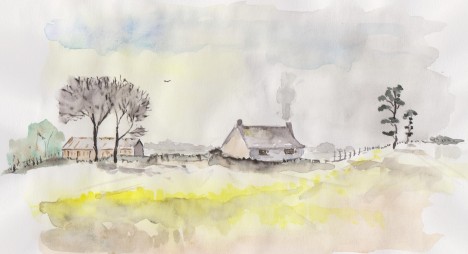 Sometimes I wonder if I unwittingly contributed to his death.

It is possible, even likely, that he died. I’ll never know, of course, but if I lived nearer I’d probably go to the factory and see what I could find out. There’s an element of guilt somewhere there. The memory of him comes back to me at those odd moments we all experience, when we suddenly feel very aware of ourselves and of our tininess in the universe. How fragile we are! How important we are to ourselves and how minuscule in the general arrangement of things.

It was very early, a couple of hours before dawn, one bitterly cold December morning. Winter temperatures in central France can drop very low. It was -6C. My feet crunched loudly on the frozen and brittle grass as I strapped our three children into the car, and by the time I had loaded our suitcases and bags my toes had gone completely numb. I’d left the engine running to de-frost the windscreen and to warm-up the car but I nevertheless went around spraying the windscreen with Anti-Gel, all the while shushing the children to make less noise. The baby slept.

I reversed, turned, and eeked out of our drive, hunched forward over the steering wheel, willing the baby to remain asleep and trying to feel positive about the long drive ahead of me. I was very tense: unaccustomed to driving on the wrong side of the road, unused to motoring at night and unfamiliar with the route, I also had the responsibility of the children and black ice to contend with.

I manoeuvred the car through the village; all was totally dark and silent, just a faded street lamp here and there. As the French say ‘pas une souris’- not even a mouse. The stone houses huddled bleakly around the little War Memorial, interspersed with small dark trees petrified in the cold. Heading east out of the village I picked up the ‘departemental’ just before Chateauroux. It was an essentially straight road, skirting Chateauroux, direct north to Tours, then motorway to Paris, the periphherique, then motorway to Calais. Dover was 10 hours’ drive away. I tried not to grit my teeth.

There was almost nobody about as I neared Chateauroux. I vaguely noticed a factory opening, its windows and doors glaring squares of yellow on the huge black hulk. Smoke belched out of a chimney. A couple of cars were parking, their headlights fanning the obscure car park. A road sign indicated another three kilometres into Chateauroux. The children had already dozed off again, clutching in their laps the breakfast picnics they’d excitedly prepared the previous evening.

As I rounded the bend, I saw him. My headlights caught him clearly just as I happened to glance that way. It has remained like a black-and-white photograph, etched onto my memory, frozen in time, all these years. He was lying on the grass verge to my right, some drunkard playing the fool and flailing one arm in the air. He shouted something. It can’t have lasted more than a second. ‘Heavens’, I thought, ‘it’s pathetic’. ‘I bet he’s been out boozing all night. Revolting man.’

Dawn crept steadily up from the east, a silvery light slowly gripping onto the edge of the earth, like a child reaching across the table for a sweet. The land is very flat between Chateauroux and Tours, almost two hundred kilometres of open field and low, grey little villages. The frozen world glittered weakly as night faded, lights went on in houses, and cars appeared on the black roads, like ants out of nowhere. Suddenly there were a few people around and the small sounds of early morning of a dog barking and a mother scolding her child.

The road led straight through these small towns and I followed it monotonously on. The children woke and ate their picnics, the baby held his own bottle. The sky-line of Tours appeared, a welcome aura of civilization, and we stopped to stretch our legs and fill up with petrol. When we hit the road again the morning was in full swing with brilliant sunshine and a bright blue sky. Traffic jams around Tours brought me neatly back out of my frozen night-time world; the children were remarkably good. Another two hundred kilometres to Paris.

It didn’t occur to me for several hours, sometime before Calais. That man! What have I done?! How could I have just driven by?! Of course he wasn’t drunk! He had been hit by a car; he had fallen on the ice; he was calling out for help. I tried to reason with myself: only a drunk would be fooling around like that in the middle of the night. But it wasn’t the middle of the night, it was just before dawn. He was a factory worker. He had been hit or had slipped and had lain there in sub-zero temperatures and probably wasn’t found till broad daylight. He had raised his hand towards me, begging for help, and I, smug in my middle-class security, had just driven on…

That feeling of guilty shock I experienced at Calais ate at me and then faded. I momentarily wondered wildly if I should pull in somewhere and call the police, or what I could have done, had I stopped to help… there were no mobiles phones then and I had three little children ….

Well, I don’t think about it now. Not often. It’s just one of those pictures one has etched into one’s memory, something that comes back to me from time to time, minuscule in the general arrangement of things.

Interested in France ?  Book your holiday in one of our lovely self-catering properties in the Charente Maritime. Go to www.seasidefrance.com