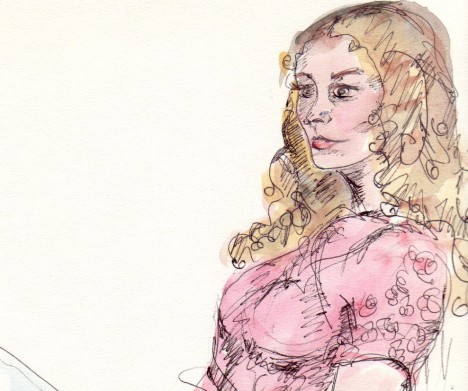 It’s OK if your knickers show.  In fact, it has been the fashion of boys to show their underpants – how utterly ridiculous.  How revolting.  How often I have been so sooo tempted to give a boy’s jeans a tug to see if they fall down totally.

And it has been the fashion for the belt of G-strings to show.  It reminded me of ST belts – if you don’t know what ST belts were, never you mind !

I remember my mother sewing little popper-straps to the inside of her blouses so that her bra straps didn’t show, but now it is fine, just fine if your bra straps show.  Indeed, many are designed to show.  Quite pretty sometimes.

One of the most hilarious underwear fashions was in the 1950s when women wore pointy bras.  Huge boobs and pointy bras.  But the bra itself didn’t show.

Everything gets discussed now.  Ads on the TV for every personal item imaginable, heavy days and light days and sunny days and lordy knows which other days.  They don’t advertise condoms yet, I think.  It is only a matter of time.  But they are on full display everywhere.  Fine.  My mother once explained to me that when a gentleman goes to get his hair cut, the barber would say to him “anything else, sir?”  – and that, apparently, was a secret way of saying “do you want to buy some condoms?”

But then my mother was amazingly naive.  She was one of the last Innocents.  She had never heard of homosexuals and discovered their existence when she was well in to her seventies.  I know, because she asked me if I’d ever heard of such a thing.   She taught us girls (we were 3 sisters) secret words for private matters, which included simply going to the loo!  I won’t tell you what those secret words were because it is just too tooooo embarrassing.

At school we used to say “charlie’s dead” if a girl’s petticoat was showing.