Trip of a Lifetime – by Maurice Chapman

Here is an amusing little tale from a friend, an example of the good old British spirit!

Concord to New York, 2 nights in the infamous Waldorf Astoria and sailing back to Southampton on the QE2!  What could possibly go wrong?

We left Bristol and drove up the M4 to Heathrow and managed to park up with plenty of time on our hands…our dream holiday had begun!  When the gates opened we were first in the queue with our best friends who were travelling with us.

“Four non-smoking in a row, if possible.” I asked

“Oh, deary deary me Sir.  We are unable to seat any of you together as regular Concord travelers have priority.”

This was a bit of a shock, but it didn’t really matter, we were only going to be on the plane for a short amount of time, after all it was a Concord!

In the Concord lounge everything was free, even the telephones and you could even make international calls.  Carol, my wife, just had to make a quick call to her mother, but unfortunately she was out of course.

We settled down and ordered ourselves a bottle of Champagne and some cucumber sandwiches…as you do!

Once on the plane I sat down next to a very nice gentleman who asked, “Do you travel on Concord often?”

“No,” I declared, “this is my wedding anniversary and I can’t even sit next to my wife!”

The old gentleman was very sympathetic and offered to change seats with my wife after lunch.  We had a fantastic silver service lunch, but before we could change seats, the pilot came onto the tannoy and told us there was a problem with one of the engines and that we would be returning to Heathrow.

Back in the lounge, we had more Champagne and we were given £250 each for the inconvenience.

One hour later we were on another Concord, less the businessmen that had missed their meetings, so we had plenty of room to sit together.  We received all the Concord goodies a second time and off we went to New York at Mach 1.

The Waldorf Astoria…what a hotel!  We were in heaven, until the early hours of the morning, when Carol went to the bathroom.  The door would not open.  Someone in the room above had left the water running and the ceiling of our bathroom had caved in!  Not exactly what you would expect from a 5 star hotel.  Apart from lack of sleep it was not a serious problem, it just meant that we had an early start to discover New York.  When we returned, the receptionist gave us a key to another room, and all our belongings were moved for us. 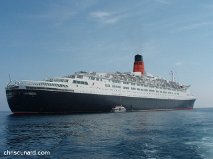 They say things come in three’s…we left the hotel and we were chauffeured to the port where we boarded the QE2.  There was a band playing and ribbons decorated the ship.  We felt like royalty!  But, sadly, not for long.  Mid ocean the ship entered a hurricane.  Most entertainment was cancelled, no-one was permitted on deck, the use of the lifts was forbidden, and most passengers were sea-sick!

Other than that, everything was fine…we arrived back in Britain 1 day late and very weary.  Yes it was the trip of a lifetime, and if I am honest, I loved every minute of it!

With the compliments of Maurice and Carol Chapman, La Tremblade.