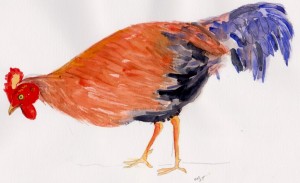 We went on a safari at Yala National Park while in Sri Lanka.  We had a great ranger-guide whose accent was so strong we couldn’t make out a word he said.  I am quite good at languages and can usually cotton-on to the appropriate accent and make sense of what I am hearing, but this guide, whose name appeared to be Tinay-Amoosh (or something very similar) was truly unintelligible.  Our own guide was called Motha and his English was brilliant.

However, I did catch Tinay-Amoosh saying “yamoo – macha!” every time the jeep moved on.  That’s probably not at all how it is spelt but it sounded like that.  Sitting waiting for Bruce to take five zillion and one photos can be very tedious towards the end of a day of touring, so I rapidly twigged that “yamoo-macha!” meant something along the lines of “let’s go!”

So, the next time we stopped, took a few photos, and I scribbled a few outlines for sketches, and then we all waited for The Photographer to finish, I called out “yamoo- macha!”   The Sri Lankans present (there were three) burst out laughing, and one of them explained to me that, translated, it means something like “let’s go buddy!”  I’d have forgotten it except that when we got to Heathrow a few weeks later, the waitor who served our tea called out that same word to his companion.  So it was with great pride that, when the tea was delivered, I said “thank you macha!”  He was flabbergasted.

We saw lots and lots of peacocks on this safari – masses of them – one forgets how huge they are.  I’ve done several sketches.  I also got some good sketches of a leopard who, seemingly unpeturbed by the jeep, was stalking the peacocks.  My poor pen didn’t know whether to concentrate on the leopard or the peacock.  We watched for a long time.

இலங்கைக் காட்டுக்கோழி.  – and that is how to write it in Tamil.

The Sri Lankan junglefowl is unique to Sri Lanka, though it has many close relatives in Africa, and all over Asia, namely the Red junglefowl, the Wild junglefowl (from which chickens were bred) the Green junglefowl and several others.  You rarely see them in captivity because their stomachs cannot cope with processed food and it is essential to their existance to forage in theie natural habitat.

The female is almost half the size of the male and has brown speckeldy plumage which makes an ideal camouflage when she is nesting.  Sri Lankan jungle fowl live in small groups of four or five, the male birds often being siblings.  They are territorial, but not agressive towards other males – who seem to keep to their own territories and females.

The eggs are usually red but can be all sorts of colours.  The male helps with the nesting and with the feeding once the eggs are hatched.