Theseus – one of my favourite things. 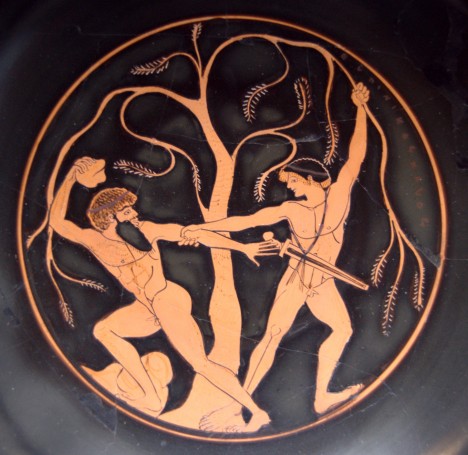 Theseus was the mythical son of the Greek sea-god, Poseidon, and of the king of Athens, Aegeus.  His mother, Aetha, slept with both her husband and the god at the same time.

He was the founder-hero of Athens and, like other founder heroes – Perseus, Heracles, Cadmus – voyaged long and hard, fighting bitter fights and overcoming terrible dangers.

Most people know of him as the man who fought and killed the Minotaur.  In a nutshell, 3000 BC: –

Every year ships with black sails arrived in Athens from the island of Crete which was terrorized by the Minotaur, a creature who was half-man and half-bull who lived in the centre of a maze.  Theseus was carted off, but before he was carried away, he called out to his father, the king, that he would one day return and that he would make sure his ship had white, not black, sails.  On Crete Theseus fell in love with a bull-dancer, Ariadne, and with her help and a ball of silver string, he made his way in to the centre of the maze, killed the Minotaur and, following the string, was able to find his way out again.  But, in his excitement at escaping Crete, he forgot to change the sails on the ship, and he sailed back in to Athens with black sails.  The king, on seeing the ship arrive, assumed it meant that Theseus had perished, and he threw himself off the ramparts.