So you can speak French ? Language learning. 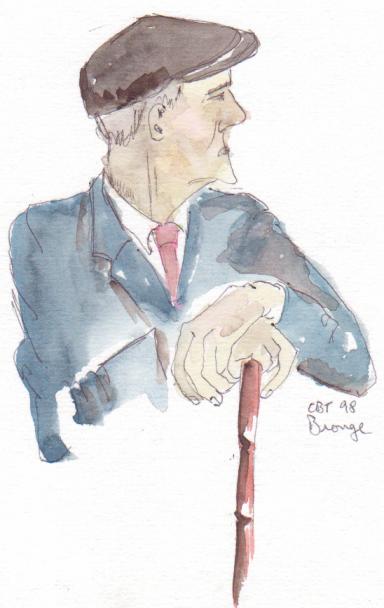 Just as they pop in to my head, a few things you may not learn at your evening class:-  (accents missing)

chicken- if it is a live chicken it is une poule, but if it is a dead one for cooking it is du poulet

back ache – mail au reins (les reins being the kidneys) if it is low back pain, otherwise it is mal au dos

custard – creme anglaise, though their version is runny and a bit light

no hard shoulder (on a road) – chaussee deformee

A French word I really like and that has no accurate translation is “les retrouvailles“. This is a noun created from the verb trouver, to find, and thence retrouver, to find again.  “J’ai retrouve mes amis a la gare” = I met my friends at the station (I re-found them).  The meeting of those friends, having not seen them for days or years, is called les retrouvailles – the finding-againses. Great word.

(illustration: an old gent watching a game of boules in the nearby village of Brouage, France).

Catherine Broughton is a novelist, a poet and an artist. She has travelled a great deal and blogs regularly.  Her books are available from Amazon (& Kindle) or can be ordered from most leading book stores and libraries; they are also available as e-books on this site, http://turquoisemoon.co.uk)