Interested in France ?  Book a holiday with us www.seasidefrance.com or e-mail [email protected]tmail.co.uk 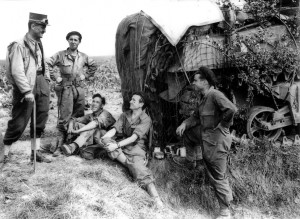 Leclerc (on the left) talking to his men during WWII

As you drive around France this summer you will notice that many roads are named after General Leclerc.  Indeed, the French do tend to name their streets after famous people, famous events (rue du 8 mai, rue du 11 novembre) or famous places.  Somebody once commented that most French streets are named after cadavres, but that is unfair.  True, our British “Oak Tree Lane” or “Old Shire Lane” are lovely, but famous people need to be recognized, dead or alive.

Anyway, General Leclerc was born Philippe Francois Marie Leclerc de Hautecloque in 1902, to a wealthy aristocratic parents, the Count and Countess of de Hautecloque in the north of France, not far from Boulogne.  He was privately tutored at home along with his five siblings till he was a teenager, and then he went to a lycee as per the norm.  He eventually entered the French Military Academy and chose the cavalry.  He graduated the first in his year.  In his military life he went from success to success and was made Chevlaier de la Legion d’Honneur among several other titles and awards. 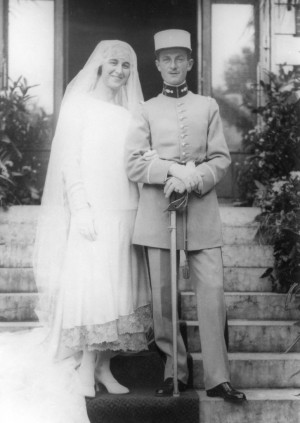 In 1925 (aged 23) Philippe married Therese, also from a wealthy noble family, and the sister of his brother Guy’s wife.  For a wedding present, Therese’s father gave them a chateau – as one does.  They had six children, one of whom died young while fighting in Indochina.

Philippe was captured by the Germans at the start of WWII but managed to get away by pretending to be a civilan exempted from military duties because of recurrent malaria.  He made his way through the German lines in to Vichy (free) France where his sister Yvonne managed to get an identity card for him under the name of Leclerc.  This was the first time he had used the name. From there he went on in to Spain where the British Embassy got him on to a British ship that took him to England. 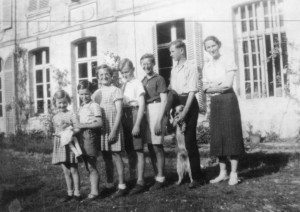 Therese and the six children

In London he joined General de Gaulle.  He continued to use the name Leclerc to protect Therese and the children if his name got in to the papers or on radio.  He wanted to join the Free French but was considered over-qualified and over-titled.  Furthermore, he was a cavalryman at a time when horses had been abandoned in warfare.  De Gaulle sent Leclerc to Africa. instead.  He was a leading figure throughout the war and beyond.  He came under heavy criticism for having French soldiers executed for joining the German ranks.  This gave rise to the French law “malgre soi” which came about after the burning of the village Oradour-sur-Glane (http://turquoisemoon.co.uk/blog/oradour-sur-glane-wwii/) when French men were implicated in some of the murders – i.e they had been forced to join the German lines.  Despite this outrageous “justice” Leclerc’s main principle in warfare was to negotiate rather than to fight – obvious to us now, but at the time not so at all.

Leclerc died in a plane crash two years after the end of the war, in 1947, while flying over Algeria.  He was 45 years old. 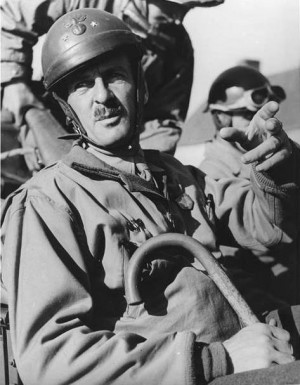 leclerc and his famous walking-stick, which he used to direct troops when he had no radio.