This was painted by Mantegna, an Italian artist, in 1490.  It is full of movement, as Sebastien appears to try to step back, and his loin cloths billow in the breeze.  The expression on his face is so clever.  His hair is also caught in the breeze.   The body is brilliantly painted, with typically Renaissance muscular beauty.

This morning one of our workers, Sebastien, mentioned to me that it was his “saint’s day” today, the 20th January, and that made me decide to look it up.

St Sebastian was born sometime around 256 AD and died around 228 AD, so not a lot is known about him and what little there is was written some two hundred years later, so that one cannot say what is fact and what is legend.  However, the general story is that he was a Christian from Milan in northern Italy during the time of the Roman persecution of Christians, under the Emperor Diocletian.   The unfortunate young man was martyred twice.  The first time he was tied to a pillar or a tree and was shot through with arrows till it was thought he was dead.  He was then rescued by Irene of Rome who took him back to her place and nursed him back to health.  He then openly criticized Diocletian and was subsequently bludgeoned to death.

There are a lot of stories about him nursing people who had the plague, or about him converting Christians and performing various medical miracles.  It is more likely he was associated with the plague because he survived the arrows – which were shot through the air, and the plague was thought to be airborn.  At any rate he was considered a protection, via prayer, against the plague.

Traditionally babies were named according to the saint’s day on which they were born, but this has not been taken seriously for a long time.  The French do wish each other “bonne fete”, however, which has nothing to do with birthdays, and it rather depends on how well know the saint is.  My own saint’s day is in November and people frequently say “bonne fete” to me because it is also the day after which it is OK to plant trees !  There is a saying “apres la Sainte Catherine, tout bon bois prend racine“, which translates as “after St Catherine’s Day, all good wood takes root”.   Jolly good! 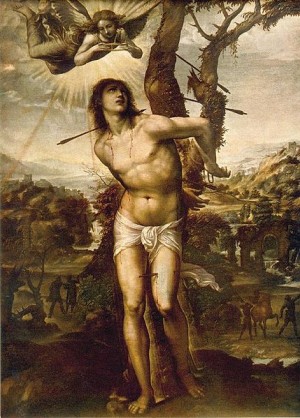 This painting is by Il Sodomo, 1525.  Behind Sebastien are the outskirts of Rome, with what appears to be a triumphal arch over a river.  Various people in the valley go about their business.  Over Sebastien’s head is an angel carrying something … I can’t see what it is.  The figure of Sebastien is once again beautifully proportioned and each muscle is outlined.  There is less movement in this picture, yet it seems more real.