Portugal …. road trip to the Algarve 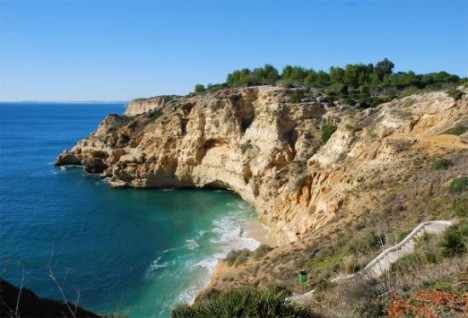 I first came to Portugal a zillion years ago when I was in my twenties.  I was with an English chap by the name of Martin, who also lived in Marbella, and who was in the throes of selling his flat in Faro.  With us we had two dogs – his was named Fitsherbert I recall, like mine a big old lollopy mutt rescued from some dire and cruel situation.

Nowadays there is a bridge but at that time there was a ferry over the river Tinto at Huelva, some 50 miles or so before the border in to the Algarve.  It was an old steel tub that smelt strongly of deisel and oil and tar.  There was just enough room for 4 or 5 vehicles, in which we had to stay.  Nothing so avant-garde as a coffee-shop.  I did attempt to go to the loo but made a hasty volte-face as soon as I saw it and said I’d rather wait.  Back in the car Martin, who was not a boyfriend, commented to me that he was glad and proud to have a pretty girl sitting next to him, and I looked at the thick churning waters around us, and reflected that I was pleased and proud to be in a half-way decent vehicle for once and to be with a man who didn’t assume that I wanted to go to bed with him – which I didn’t. 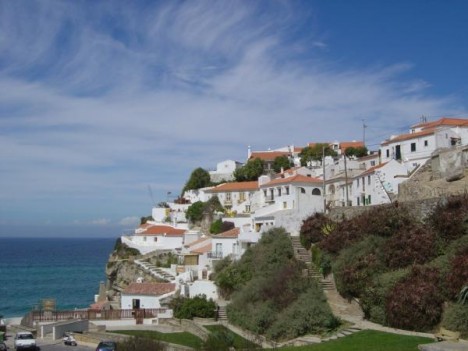 We crossed the border somewhere a little north of Cayo Marim and within minutes pulled in to a small restaurant which Martin had frequented several times before.  We were greeted by a large buxom lady wearing a floral dress which was too big for her (and that means big) who flung her arms around Martin’s neck and fetched water for the dogs, babbling away in Portugese as loudly and as quickly as she could.  She pumped my hand vigorously up and down, and after a while I realized that she assumed I was Martin’s bride, or at least his fiancee.  She spent some time wishing me many sons and long happy life, stopping every now and then to call something in to the building behind her.  In no time a small middle-aged man appeared, and clasped Martin’s hand and clapped him on the shoulder before coming over to me and wishing me even more sons.

Now, I don’t speak Portugese now and I didn’t then, but if you speak Spanish (which I do and did) you can generally – though not always – get the gist of what people are saying.  The Portugese accent sounds to me far more like … Russian perhaps, than a Latin language, and that is what makes it so difficult to follow.  It seems the Spanish double ll become ch in Portugese, so that como se llama becomes como se chama.  There seems to be a j or ge or ch sound to the Portugese language.  The town we stayed in till a day or three ago was called Cascais – pronounced Cajch-kaiisj … or something like that.  Many words are identical and many are totally different.  It is easy to make a dreadful mistake (see earlier blog about Spain or blog called learning Italian the Hard Way). 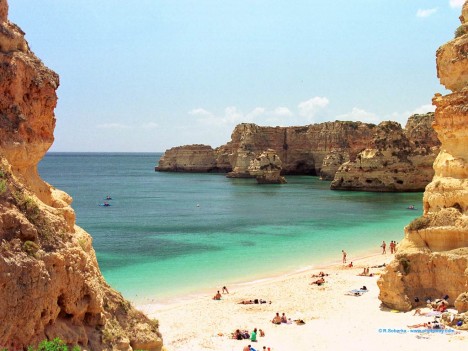 Anyway I didn’t trouble to explain to Martin, who spoke neither Spanish nor Portugese, about the misunderstanding for I quite rightly assumed that I would be given Regal Treatment as Martin’s bride, whereas as a mere “friend” of some sort it was more likely I’d be given another dog’s bowl out of which to drink.  I worried a bit about a wedding ring and sure enough after a while the hefty wife asked me why I had no ring.  I told her that young people often forgo a ring these days, which made her shake her head sadly, but she brightened up considerably when I announced that I would definitely be aiming at many sons.

Catherine Broughton is an author, a poet and an artist. Her books are available from Amazon and Kindle, or can be ordered from most leading book stores and libraries.  Catherine Broughton has travelled widely and her entertaining blogs about,  and sketches of, her travels are on http://turquoisemoon.co.uk

For more about Portugal:-