People in my books: Mana-oua-oua. The Kanak people of the South Pacific. 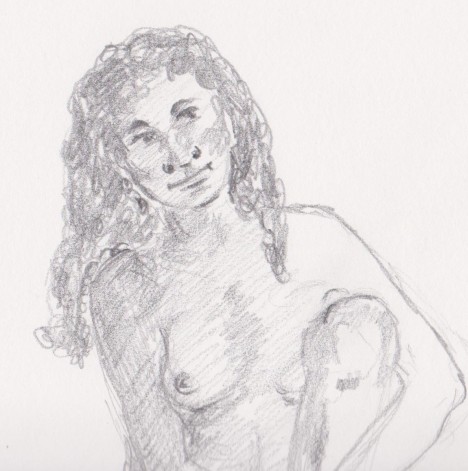 Born and raised on the island, Mana-oua-oua (meaning seagull) was an unaffected, straight-forward girl with no particular aspirations except to be good, honest, and to one day marry and have children.  It was all she wanted in life and, although the cinema had come to Noumea and she sometimes saw posters for films and pictures in discarded magazines, she had no wish to be anybody other than the person she already was.

And that was a nice person.  She was good-looking in the Polynesian way, slender, slightly coy, with a quiet but self-assured voice.  She spoke French fairly well and had a good smattering of simple English, but she did not regard these attributes as anything other than the norm.   Like most islanders she was slow-moving, never rushed, uncomplaining.  A small smile invariably played about her mouth and she had smooth coffee skin which she treated with palm oil as her mother and her grandmother had done before her.

Mana did own some European-style clothes.  There was a yellow cotton frock that she had bought in the second-hand stall in the market, also a skirt and blouse.  She saved these items for best but, if asked, she would have been unable to tell you what “best” was all about.  She was almost always dressed in a lava-lava, and she had some twenty or even thirty of these, which were shared with her sisters and other close female relatives.  When at home she wore the lava-lava around her waist, and when she stepped outside she hoisted it up under her arms.  She was always barefoot.

When Greg stepped in to her life he brought trouble with him.  She supposed she loved him, but knew automatically and instinctively that he was not for her.  He was a different league … not necessarily a better league, but a different one … and she looked forward, in her uncomplicated way, to meeting an island boy to marry.  But first, there was the problem of Greg. 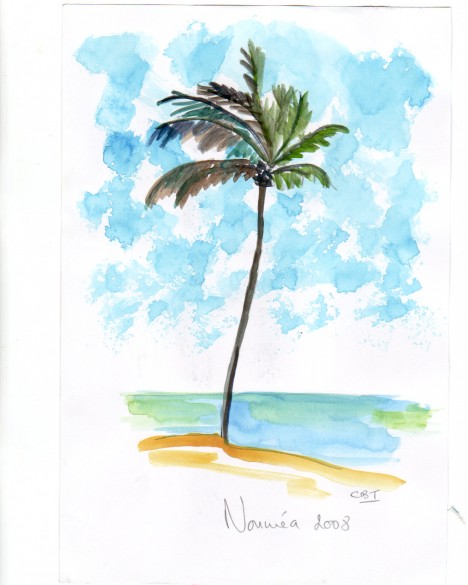 Extract from “French Sand” by Catherine Broughton, a novel set in the South Pacific:-

Melanie left her sandals and towel in the sand, next to Jimmy who sat quietly, a toy car in one hand, his little face solemn.  The water was impossibly warm and clear, and underfoot soft sand gave way as Melanie advanced slowly, her shorts rolled up as high as they would go, the sprig of jacaranda still in her right hand.

She stood some time, eyes screwed up against the brilliant day, and waited till she was sure the tide was turning.  She felt rather than saw Jimmy step in to the water behind her.  He was not crying, and she knew she must not either.  This was just a small ritual that Greg would have liked, and that she must do for all their sakes, for closure …

She leant down and placed the jacaranda on the water, and the tide instantly took it and it floated away slowly, out in to the ocean where Greg lay.

“Goodbye, goodbye …” she whispered to the sea, and behind her she heard Jimmy, quietly, almost like a prayer:

She first met him at a cocktail party at the South Pacific Commission one hot night in January.

As a general rule most of the Commission officials met to welcome any newcomer to the island and this time it was for the new legal advisor. They gathered, drinks in hand, bowls of peanuts and tit bits on the side tables, in the airless refectory rooms. Cigarette smoke wafted up in to the air and created a light cloudy atmosphere that was not unpleasant. Most people knew each other in Noumea or, at any rate, if they were of the same ilk, or in the same line of business, they knew each other. Even if they didn’t actually know each other to speak to they had at least heard of each other, or heard of a neighbour or a friend, or had passed each other in the flame-of-forest streets or by the sandy beaches along the Baie de Citrons.

That’s how it was in this relatively small island community, so when she saw him she did a kind of second-take, thinking she’s seen him somewhere but couldn’t quite think where and at the same time deciding he’d not been long in the South Pacific for he had that bright pinkish tan that Europeans in Europe have, as opposed to the deep leathery tan of the tropics.

There were some fifty or so men present, most of them French, a powdering of English, several Australians, several New Zealanders, a young Dutch engineer with stunningly yellow hair and another chap, probably of Italian extract, with stunningly black hair. With most of them were their wives, and the wives were all dressed up with back-combed hair-dos and heavily starched petticoats that were murder to wear in this heat. The little clickety-click sound of stiletto heels had pervaded the whole room when they first arrived, now silenced as they stood about dutifully, legs aching and ankles swelling, sipping Martini and smiling graciously. Some held their cigarettes in elegant little holders. Almost all of them were smoking. The men were mostly in white tropical suits, necks sweaty under their old school ties and hair slicked back with Brillantine. A record-player in one corner of the room played a new song from England which was apparently a great hit – “she loves you, yeh, yeh, yeh,” it seemed to say. Everybody was ignoring it which was just as well for the sound was distorted under the steady rhythmic whirr of the overhead fans.

Her escort that evening was Peter Maddison, the secretary general of the Commission, who also happened to be her neighbour. His wife usually attended these functions but had gone back to Sydney for a few weeks to visit an ailing relative. She had been glad of the chance to get out and Peter was a harmless and careful man who would not expect anything … difficult … embarrassing …of her. Peter would not want to stay late and she was also glad of this, needing to be back by midnight because Rosa, the Kanaka house-girl who was babysitting tonight, wanted to be out painting Noumea red by midnight. Not that Jimmy needed much sitting these days. At nine years old he could quite possibly just be left.

She sighed slightly as she glanced around her. Her life had changed so radically since she first set foot in Noumea, over two years ago. Fresh out of a Sussex country village, she was the typical little housewife who had no idea about anything at all except how to make scones and sew on buttons. Well, she’d learnt. She’d learnt plenty.

“You’re sighing!” exclaimed the man next to her. Then, “may I refill your glass?”

The English tended to stick together and she turned now to Bill Taylor, a doctor of tropical diseases, who she had met several times before. His wife was not there either, heavily pregnant with … she counted … it must be their sixth child. God forbid! He was a nice man, a really nice man, the sort who could always be counted on, sincere and honest and compassionate. She never seemed to meet men like him – not available ones, anyway. He was shorter than average with black hair and a public school accent that smacked faintly of Somerset.

“Let me introduce you to our new comer,” said Bill Taylor and he steered her expertly by the elbow, his touch barely discernable against her skin, towards Maurice du Chazan.

“Enchanted, Madame,” said du Chazan, using the direct translation of the French greeting. Bill Taylor made small talk for a few moments and then moved off to join some of the others – the Dutchman, and the Australian with the big nose who was the accountant … Melanie felt a moment of panic, which was quite unlike her, as she found herself alone with du Chazan. Years later she decided it was A Sign, but that evening she was only conscious of a mild sensation of threat in the aura around her and her companion.

She saw in front of her a man in his early forties, not much taller than she, with a thick shock of brown hair already going grey at the sides. He also was wearing a white suit and a tie. He was good-looking in a standard sort of way, with a firm jaw-line and clear pale eyes. His hands and fingernails were immaculate – quite the opposite of Greg’s, she thought, momentarily picturing the work-worn hands she used to know so well.

“Where are you from?” she asked politely.

“Bordeaux,” the man bowed very slightly as he said this, then added, “do you know where that is?”

How rude! She thought, but she smiled at replied:

“Why yes, all the best wine comes from Bordeaux!”

He had seemed pleased with this.

“I own a vineyard,” said Mr du Chazand conversationally, “along with my elder brother.”

“Who looks after the vineyard now?”

“My brother and my mother and – of course – our workers. We have four permanent staff and we take on hundreds during the vendange.”

“The busiest time of year when we pick the grapes.”

Melanie kept up a pleasant conversation with Mr du Chazan till another couple joined them and the subject changed from wine to something different. Most of these cocktail parties were the same, Melanie mused, but she didn’t dislike them.

She chatted a while with one of the wives and almost instantly forgot du Chazan.

Peter dropped her off outside her little flat soon after eleven. He waited politely till she got inside. Rosa was sitting on the bottom step of the stair, gloomily swinging a claquette round and round between her fingers. Rosa had several times hinted that Madame could perhaps give her a pair of her cast-off shoes, for these rubber thongs were hardly the thing for painting Noumea red and stilettos would be so much better, but Melanie hadn’t got any shoes to throw out and anyway suspected that Rosa’s feet were considerably bigger than her own. Most of these native girls wear claquettes, Melanie reasoned, refusing to feel bad about it.

Rosa sauntered off down the drive, still swinging her claquettes, her feet bare on the dark dusty path. She disappeared in to the night, They were on the whole quite attractive, the island people. They were Polynesian in origin and although they had none of the Negro ebony beauty one might expect, nor any of the porcelain beauty of the Orientals and nor did they show a trace of the finely-chiselled features one saw among the Indian classes, the locals here were … she searched for the word … wholesome people, with soft-skinned faces and a broad bone structure. Greg had once told her that the Kanaks were especially lovely in comparison to the aboriginals of Australia … and again a momentary vision of him slipped in and out of her mind, quickly, faintly, so that she was barely aware of it … and even as awareness dawned for a split second, she shook the vision away again, and forgot it equally quickly. She had become good at doing that.

Melanie lit a mosquito coil and locked up the flat for the night. She made her way across the darkened room, the pungeant odour of the coil filling her nostrils, to Jimmy’s room. He lay with his mouth wide open, sound asleep. His mosquito net had been shoved to one side and she pulled this gently back over her son before retreating to her own bed.

Buy as an e-book on this site:

or order from Amazon/Kindle:- 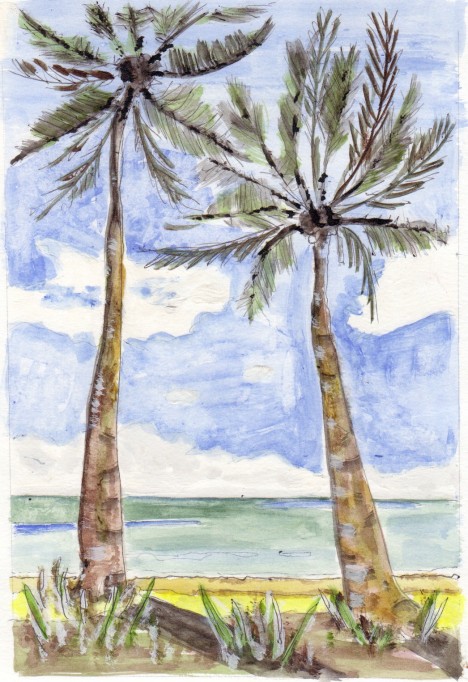 For more about the locals of New Caledonia:-