People in my books: Greg. An English couple move to New Caledonia, 1960s. 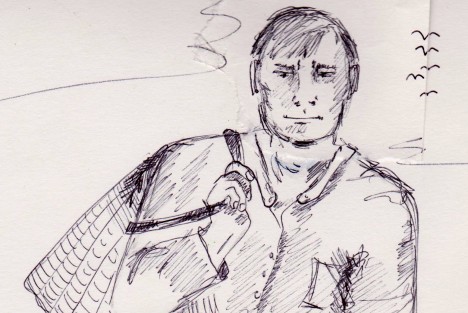 Greg was a man’s man.  He liked boats, engines, tractors, fishing nets, wet and oily things.  He was serious, but brilliant at telling a joke.  He was hard-working but enjoyed a couple of drinks with his friends.  He was honest, but open to ideas for making a quick buck.  The cold didn’t bother him and he had spent many an hour working on a car engine in some frozen Sussex garage in the depths of an English winter.  Likewise the heat didn’t bother him and he was totally at home under the South Pacific sun at the hottest time of the day.  He didn’t burn, he enjoyed working up a thirst. Mosquitoes droning around his head at night didn’t bother him.  It would never have occurred to him to be afraid of a snake … or a dog … or a shark.

Tall, strong and good-looking, he had had plenty of girl friends.  But when Melanie announced she was pregnant, he married her with no hesitation, the way one did in those days.  He accepted his lot reasonably graciously, barely noticed the advancing pregnancy except when he wanted to have sex with his wife, and was most certainly no where near the hospital at the time of the birth.

Baby matters were no concern of his, but he was proud of his little son and, asked if he loved him would have said yes, of course.  Or perhaps he’d have felt awkward and said that he didn’t go in for all that lovey-dovey stuff.  It was way too late in the day when he realized just how much he loved Melanie and the child. Way too late.

Extract from “French Sand”, a novel set in the South Pacific:-

Glancing around her again, she rapidly removed her skirt and pulled on the trousers. She hoisted the zip quickly up the side and fastened the button. Although she knew there was nobody around she had a horrible and disconcerting feeling of being watched.

“For goodness’ sake bark,” she said to the dog, “if you see any body or anything – bark! What d’you think I brought you along for?!”

She pulled the socks and plimsolls on and locked the car. Within seconds the heat encased around her legs and feet was almost suffocating. She had seriously considered putting the slacks on before leaving home, but it was this very heat that she couldn’t tolerate.

“C’mon, Tizzy!” she called and set off at a brisk pace across the escarpment, the map and papers in one hand and her bottle of water in the other.

The bottle soon became heavy and within fifty yards she was totally drenched in sweat. There was no shade and she realized she should have brought a hat. Nobody, but nobody, went for a walk in this heat. The sun blasted down on to the rich red earth, bounced back off the rocks, and permeated the very core of the air itself. She took a few gulps of warm water. All around, half embedded in the dust, were cartridges and shells, even helmets and old army water bottles. Bitter relics of the war. Every now and then were piles of stones, built up like a small wall, probably by sweltering soldiers trying to make a bit of shade. She could feel her feet swelling inside the plimsolls but was nonetheless glad of them for every crevice harboured snakes and scorpions and centipedes; Tizzy stopped regularly to sniff under a rock and more than once recoiled suddenly.

Too hot to continue, Melanie was about to turn back when she realized that the track had brought her round to where she had arrived the previous week. There, further down the slope and off to the east, perhaps another mile away, was the shelter. Almost entirely covered in brambles she could easily have missed it. From this angle she could see it was bigger than she had thought. A footpath, no more than a few trampelled weeds and cut brambles, led from this side of the shelter to the furthermost point of the escarpment, where it disappeared out of sight.

This told Melanie that there was somebody about; perhaps not right now, but generally , there was somebody here who used the shelter. Goat herds, clearly, but why had Greg done a map of it? Most of the goats were wild and the local people were not animal farmers really, though she supposed it was plausible that they looked after the goats in an overall sense – goat meat was popular, and it made sense to “farm” the animals to an extent. She knew nothing about goats or about what they did or didn’t need in the way of supervision and care. She had eaten fromage de chevre several times till somebody had told her – Bill Taylor, perhaps – that it was a quick way of picking up worms. The very thought made her feel sick.

Tizzy had not barked at anything but was showing signs of being too hot. Melanie cupped her hand and poured a little water in to the palm.

The small dog came over and eagerly lapped up the tiny quantity of water. Melanie poured a bit more.

In most ways it seemed like a wild goose chase. She had no idea what she was looking for or why. Had the first page of the roll not been in Greg’s handwriting, and especially had it not seemed secret, she doubted she’d have taken an iota of notice. But, the more she thought about it, the more she realized that there was something about what Greg was doing – or not doing – that she had not known about. 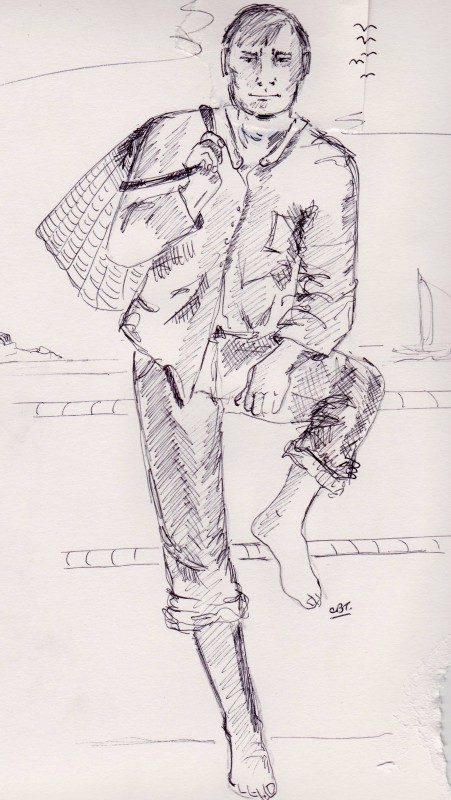 To order your copy of “French Sand” as an e-book :_

Catherine Broughton’s books can also be ordered as paperbacks from most leading book stores and libraries.