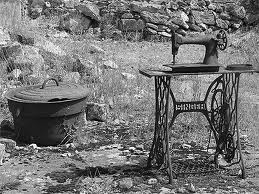 I have had such a huge response following yesterday’s item on Ordaour-sur-Glane that I feel I should try to answer a few of the questions you have asked.  I don’t know much more about it except the following.

In 1953 there were 65 of the 200 German soldiers still alive and 21 of them were taken to Court over the atrocity.  Ironically, of those 21 soldiers, 14 were in fact French.  They were from the area of Alsace, in France, and were of German origin – and were considered Germans by the SS.  They all pleaded that they were forced to commit the crimes against their will, and that they had also been forced in to the SS against their wills.  That may well have been true.  An amnesty law for “malgre-nous” (meaning despite us) was rushed through and the Alsatians were released.  The Germans went to prison but were released a few years later in 1958.  One of the German commanders, Heinz Barth, was tracked down and caught in 1983, sent to prison, and released in 1997.  General Heinz Lammerding, the man who gave the orders for the atrocity was never brought to trial and he died a rich man in 1971.

Click here to see part one of this item

Interested in France ?  Visit www.seasidefrance.com to book your holiday.